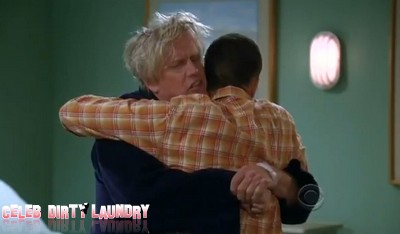 An all new episode of Two and A Half Men will air tonight and it is called ‘Frodo’s Headshots.’  Surprisingly last week’s episode was up about 800,000 viewers and was aired by 14.71 million people and finished second overall to Dancing With The Stars.  I guess everyone likes to watch a train wreck.  In last week’s episode Alan began to unravel and struggled to come to terms with his brother’s death.  He ultimately check himself into a Malibu mental institution.  If you missed last week’s episode you can read our official recap here!

Frodo’s Headshot Official Synopsis: Upon his release from the hospital, Alan is met with a slew of challenges that test his ability to cope.   Last week he got locked up, this week Allen’s life goes from bad to worse.  Gary Busey will guest star as himself in tonight’s episode.  Gary will be playing a patient that Alan (Jon Cryer) winds up sharing a room with at a mental facility.

As it currently stands most of the comments we see week to week complain about the show.  One has to ask themselves how much longer this series can last the way it is?  What do you think is Two and a Half Men winning?  Sound out in the comments below.

Take a look at the  preview of Frodo’s Headshot below and let us know what you think in the comments!