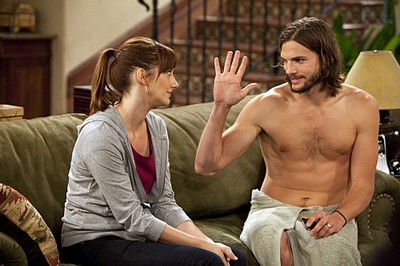 Last week was the second episode of Two and a Half Men and after what I considered a disastrous first episode I thought perhaps the second episode would be better but much the same as the first one.  If you missed last week’s episode you can read our official recap here!  Tonight is the third episode and it is called ‘Big Girls Don’t Throw Food.’

In tonight’s third episode with Walden Schmidt, Alan gives dating advice to Walden as he prepares to go out with Bridget and Jake decides to drop out of school because that is what Walden did. On to our RECAP from Rosie at Fit Fab Celeb.

Alan moves back in and finds Berta already moved into his old bedroom, Walden steps in to resolve the matter and after Berta explains to Walden that Alan is like herpes, he never goes away – Alan quickly moves into Jake’s old bedroom so Walden doesn’t catch on.

Judith arrives at the door with Jake, it is Alan’s weekend to take care of him – he shuts the door and goes to break the news to Walden. Alan turns the story around and tells Walden that Jake is just visiting and weasels an invitation for Jake to sleep over. One problem, Alan has to break the news to Jake that they have to sleep in the same room and Jake loses it, tells his dad to sleep on an air mattress. Alan threatens to move back to his mother’s house and Jake is already to go, calls his bluff, Alan gets to sleep on an air mattress, they are sharing the room.

More: Did “Two and a Half Men’s” Audience Stick Around?

Walden has a date with Bridget and tells him to pick the restaurant. As we learned last week, Walden has trouble making decisions and asks Jake where he should take her. During their conversation, Walden tells Jake that he failed all his classes in school because he was to smart for them. Later, Jake approaches Alan and tells him the reason he is not doing well in High School is that he is too smart and plans on dropping out of high school and start his own business like Walden.  Alan tells Jake that he is not a prodigy, not smart and he is not dropping out of school.

Walden is dressed for his date and Alan comes in to tell him how he is not happy about sharing his dropping out of school, he explains that at 17,  Jake is looking for a role model and although anything other than being wasted, tattooed with a prostitute is an improvement, he should still be careful.

Walden asks for advice on how to get Bridget back and after Alan gives him a bunch of nonsense, Walden says he should have asked the kid.

Out with Bridget, Walden realizes taking her to the restaurant that Jake chose was a big mistake and when she tries to tell him that the marriage is over, Walden asks her if they are going to have sex later. Bridget explains that she is looking for a mature and responsible adult, which is not Walden.   Meanwhile, the little girl behind him starts throwing food at him and Walden gets into an all out food fight while Bridget looks on and you can see the look her face, he’s so immature.

Judith goes over to see Walden to give him a piece of her mind about Jake wanting to quit school. Walden doesn’t really listen to her, instead he starts telling her about his problems with Bridget and Judith starts to console him one minute, then the next they are making out just as Jake walks in, snaps a pic on his cell phone and says “Oh, Yeah, I am so quitting high school”.

Later that night, Judith is in bed with her husband and she asks him to grow a beard.

ughh another crappy show!  Is it just me?  What do you think?  Did you enjoy this episode?  Sound out in the comments below!  We need Charlie Sheen back!!!!

! Do you think the show sucks? Should they bring back Charlie?