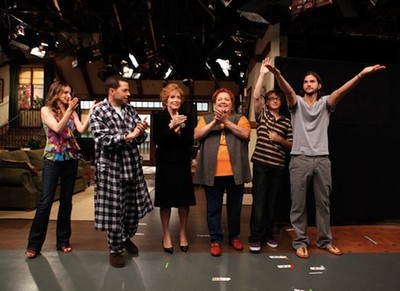 Last week we were hoping that after three weeks Two and A Half Men would find it’s groove.   We were wrong the many, many comments we got from our viewers agreed the show just isn’t the same without Charlie.  If you missed last week’s episode you can read our official recap here!  Tonight is the third episode and it is called ‘Nine Magic Fingers.’  Our recap is brought to us tonight by Rosie over at Fit Fab Celeb!

In tonight’s episode Walden is looking for Mrs. Right and Alan wants Lyndsey back in his life. Will we get to see a little more of Jake tonight? Lets see, here’s your recap.

Berta comes back after a morning walk on the beach and tells Alan, who is enjoying his morning coffee and paper that Malibu is the best place on earth. Walden wakes up, he missed going out for a power walk with Berta. Alan is looking in the paper for a new place to live, but Berta tells him to stop looking in the sports section and laughs at Walden when he asks Berta if Alan is really going to move out some day.

Alan asks Walden if he can bring an overnight guest, he has a date and just in case he wants to take her to his room, the date is with his ex Lyndsey who now forgives him for burning her house down and calling her a slut.

Alan is at dinner with Lyndsey and she gives him condolences about his brother’s passing and Alan explains that he got run over by a train and calls Charlie “Charlie Tartar”.  Alan confesses to her that he hasn’t slept with anyone since they broke up.

Back at the beach house, Berta has a man that arrives at the door and Walden asks her what’s up, she says “I’m going to sit down, have dinner and rock this girls world”.  Walden is dismayed that everyone is getting laid but him. All of sudden, Alan arrives back from dinner with Lyndsey locking lips. She moves over towards Walden to give him some advice, she calls him tall, good-looking and very successful – she tells him to get out there and find someone who appreciates what he has to offer.   Alan intervenes, he tells Walden that Lyndsey is right, it is a world full of sexy people and convinces Walden to go out.

After a romp in bed, Alan tells Lyndsey she seemed like a different woman. All of sudden Walden knocks on the door to tell them that he has found Mrs. Right, one of Charlie’s ex’s, Courtney.

The next morning, Courtney is on Walden’s lap feeding him breakfast and she asked Alan if she wants to watch them have sex, he says no, then she tells him to get out quick cause they are going to do it in the kitchen.

Later in the day, we finally get to see Jake and finds Courtney on the balcony spray tanning herself. After a few minutes of gawking at her in her bikini, Alan arrives and asks for a few minutes alone with Courtney where he tells her to back off and leave Walden alone.

Later that night at dinner, both couples are out together for the night. Walden surprises Alan by asking Courtney to move in with him.

The next morning, Alan is alone with Courtney in the kitchen and she basically acts like the cat that swallowed the canary. Alan tells her that he has one more thing in his pocket (to get rid of her), the doorbell rings and it is Walden’s ex Bridget. A stand-off between the women ensues and Bridget calls Courtney a Botox Barbie; she then offers her $50,000.00 to buy her off and Courtney takes it and runs.

Walden gives Alan a warning, there are women out there that will only want you for your money and Alan said he is sure she wanted him for his chiseled good looks and freakishly big penis. Walden then tells Alan that he is happy that he always has his back, Berta overhears and declares that she is moving out.

Another horrible show, I bet the ratings will be down again tomorrow.  What did you think?  Sound out in the comments below!