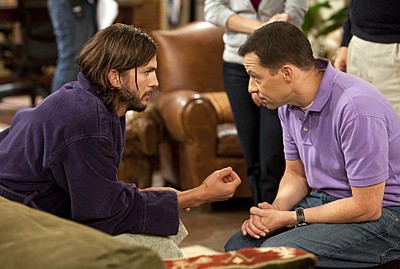 Are you missing Charlie Sheen?  I am, anyway tonight is the fifth episode of Two and a Half Men and it is called ‘A Giant Cat Holding A Churro.’    On last week’s episode Alan was trying to reconnect with Lyndsey, while Walden tried to move on from Bridget.  If you missed last week’s episode you can read our official recap here!   In tonight’s episode Alan has trouble accepting Lyndsey’s seedy movie past and Walden tries to cheer him up by throwing a party, on to our recap, I warn you that the recap is NSFW.

Alan is in bed, in his underwear and Lyndsey walks in and tells him that he’s not getting any, he tells her that he popped a little blue pill a few minutes ago in anticipation. He tells her that he doesn’t want to waste the pill because it is expensive and she offers him $20 bucks not to have sex. Alan gives her suggestions on what else she can do to help him out with his problem and she throws him out of the room.

Later that day, Alan goes over to Lyndsey’s house and tells her that he watched her porn movie ‘Cinnamon Buns’. She agrees to doing it, it was 20 years ago and she needed the money. Alan tells her that he is not happy about it and she then asks him what did he do in his life that he is ashamed of. Alan tells her about a dog that they had and Charlie convinced him to rub peanut butter on his testicles – the conversation continues and Alan reveals that he once kissed a guy and the diamond earrings he gave Lyndsey last year, he stole from his ex-wife, she throws him out.

Walden is in the kitchen eating brownies and Alan walks in, Berta helped him make the brownies – it was her recipe and they are both are BAKED. Alan reveals that he may have done something wrong when he told Lyndsey the truth.

Alan goes into his room and leaves a phone message for Lyndsey, he tells her that he really did like her movie, especially the part about seeing her original breasts.

Lyndsey asks to see Alan and Walden closes the door, throws Alan behind the couch and tells her he’s not there.

The next day, Lyndsey and Alan are sitting down together and she tells him that relationships are all about honesty, all of sudden he throws him out, I guess he mentioned being naked and the whip cream.

Thoughts?  As far as I am concerned it sucked again,  we WANT CHARLIE BACK!

Thanks to Rosie at Fit Fab Celeb for the recap tonight!