BY Kinsley Goldman on October 15, 2011 | Comments: one comment
Related : Ashton Kutcher, TV, Two and a Half Men 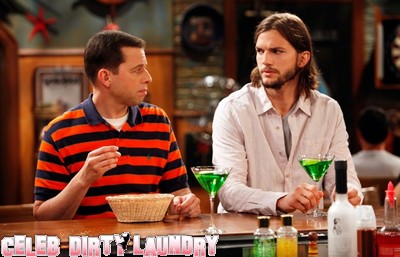 This week is the fourth episode of Two and a Half Men and tonight’s show is called ‘A Giant Cat Holding A Churro.’  On last week’s episode Alan was trying to reconnect with Lyndsey, while Walden tried to move on from Bridget.  If you missed last week’s episode you can read our official recap here!

Official synopsis: Alan isn’t thrilled when he learns of Lyndsey’s adult film, so Walden hosts a party to lift his spirits.   How do you get over a devastating breakup? With a bikini party of course!

If you are still tuning into Two and a Half Men I am sure you will agree the show is not doing well.   The show is not funny anymore, the laughs are few and far between.   Walden (Ashton Kutcher) is just not funny, he character is just stupid and the only thing watching Ashton does is make us miss Charlie Sheen more.  Big mistake Chuck Lorre!

Check out the preview video below and let us know what you think about it!  Sound out in the comments below!