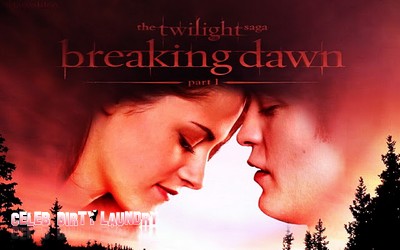 ‘The Twilight Saga: Breaking Dawn Part 1’ has taken $284 million globally on its opening weekend – not a bad start.  The fourth instalment in the popular film franchise – which tells the story of vampire Edward Cullen and his human love Bella Swan – more than doubled its $110 million budget and is set to one of the most profitable movies of all time.

Execs at distributors Summit admitted they were shocked with the popularity of the franchise – which stars Robert Pattinson and Kristen Stewart at Edward and Bella – with Richie Fay, head of distribution, remarking: “I’m 53 years old, and I haven’t figured it out yet. It relates really to young girls and things that are important to them, their romantic ideas of love and relationships, without getting so physical, at least on screen, that it becomes a worry for their parents.”

‘Breaking Dawn Part 2’, the final film in the franchise will be released next year and director Bill Condon has described it as “epic.”  Big surprise there… NOT!

He said: “[‘Breaking Dawn – Part 1’] is a very, very emotional, romantic story in the first half that gets dark and has elements of a horror movie in it. The second one: It is truly the meeting of the vampires from around the world, so it has a really kind of global feeling.”

Remember folks – in Hollywood its all about the money.