Seeing Down Under Venus William’s Dress Causes Controvesy Down Under 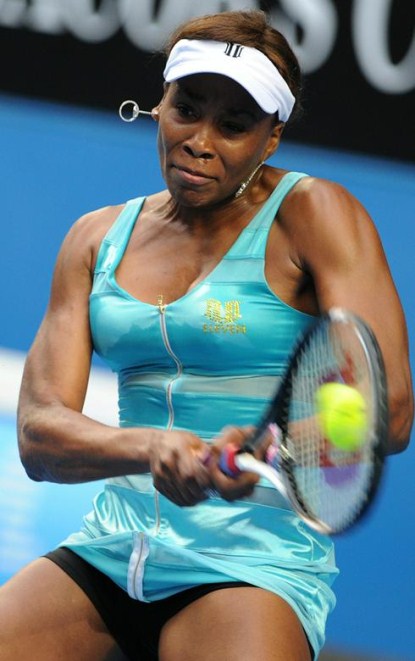 Venus Williams hasn’t won a grand slam singles title since 2008 when she scored at Wimbledon.  Nevertheless she is making her mark with her fashion statements.

Last year it was the frilly corset-style dress she wore at the French Open which seemed designed for love, American style, not tennis.

This year, she’s off to roaring start at the Australian Open, wearing the shortest dress imaginable – more like a jersey then a dress.

After winning her opening-round match, Venus explained it was an “illusion dress.”  The intended illusion being that she wanted to appear nude by wearing flesh-colored shorts.  The athlete added “But at the last minute I decided not to.”   Still, Venus’ black shorts present a rather novel look.

Never short of comments Venus Williams continued, “A lot of the focus of the dress is the zipper.”

Also interesting is the musculature Venus displays – unlikely she attained this naturally – could be the result of plenty of Human Growth Hormone.