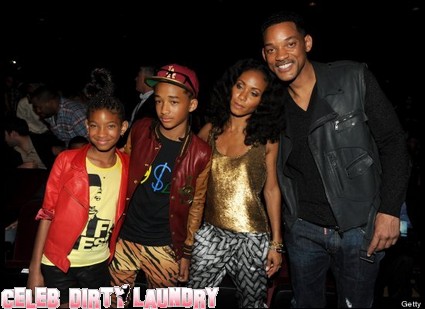 Although their reps have not confirmed the story In Touch Weekly is reporting that Will Smith, 42,  and Jada Pinkett Smith, 39,  have separated.  The two have been married since 1997.  They have two children together Jaden Christopher Syre (born 1998) and Willow Camille Reign (born 2000).  Jada is the step mother of Smith’s older son Trey from a previous marriage to Sheree Zampino.

Will spoke about his marriage to Ellen in 2008 and said: “What I found is divorce just can’t be an option,” he said. “It’s really that simple. And I think that’s the problem with L.A. – there are so many options. So a huge part of the success for [Jada] and I is that we just removed the other options.”

Jada said about marriage: “When Will asked me to get married, I said, ‘Understand this, there will be no divorce. So, you might be in one bedroom and I might be in another, but we’re gonna be under the same roof and we’re gonna be married.”

Is the rumor truth or fiction we don’t know but In Touch has an insider, of course there are not revealing the name.  Let’s hope that In Touch is wrong and this is just another unfounded rumor!