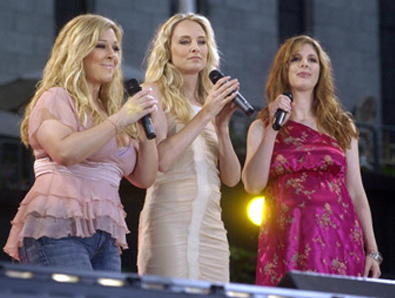 Second generation pop stars, Wilson Phillips, will star in their own reality show called The Wilson Phillips Project for TV Guide Network.
The group is known for being the offspring of prominent musicians: the Wilson sisters are the daughters of Brian Wilson of the Beach Boys and Phillips is the daughter of The Mamas & the Papas John and Michelle Phillips.

We will get to see the story unfold of how the Grammy-nominated vocal group, consisting of sisters Carnie Wilson and Wendy Wilson and their best friend Chynna Phillips return to the musical spotlight.

Carnie Wilson said: “Wilson Phillips is extremely excited to start a reality show following the reunion of the girls and what it’s like 21 years later. Between touring, recording a new CD and raising nine children, the show promises love, laughter and head-bumping!”

TV Guide’s Allen Shapiro added: “Our original programming is bringing fans closer to their favorite celebrities, and our new show with Wilson Phillips underscores this commitment.”

Wilson Phillips released their debut album back in 1990. It sold more than ten million copies worldwide and featured the Billboard Hot 100 chart-topper and Grammy-nominated song ‘Hold On’.

In order to get the publicity going Chynna Phillips has been offered up as a sacrifice – the poor woman will be a contestant on the upcoming season of DWTS! Who will be the next star to sell out and appear on DWTS – how about Eminem?