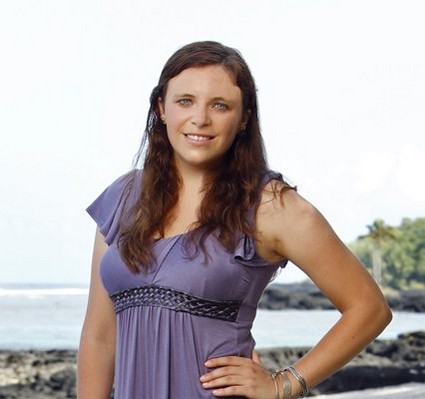 Sophie Clarke, 22, from Willsboro, N.Y. outwitted and outplayed everyone to win Survivor Season 23.    Stay tuned as we cover the reunion show with up-to-the-minute details.  If you missed tonight’s show you can read our official recap here!

Sophie says she had a feeling she might win.  She felt like she had her finger on the pulse of the game from the beginning.  She says they made it a religious framework and she just fit into it.  She says she comes from a small town of 1,500 and her whole town is really supportive.   She told no one in her family how she did in the game.  She described the experience as life changing that millions of people experienced with her.  She talks about how being told she was a spoiled brat felt and she says she understands because she has a hard exterior and is going to try to change.

Jeff tells Coach that people liked him this time.  Coach says he was joyous this time, he loved every minute.  He felt like it was a gift, every second out there is a gift and he feels humbled by the game and he feels like he got redemption this time.  He has learned from this game he does not take himself serious anymore.  Jeff asks him about the praying, it is one thing to pray and another to pray to find a clue.   Coach says to some people the praying seems trite but for him the praying made them unshakable.  Coach says it became ingrained into the fabric of their society there.

Jeff asks Albert why did he ask Coach not to bring Sophie to the final three.   Albert says because he knew that Sophie might win.  Jeff asks the jury if Coach did not take Sophie would he have won and yes Coach would have won if he did not take Sophie.  Coach says it was not a wide decision on his part.   Jeff asks the jury if Ozzy would have won if he was in the final three and the jury answers YES!

Ozzy tells Jeff that Sophie was a good competitor and the person he had to beat.  He felt Sophie was very intelligent and a strong competitor.   Ozzy said that at the last challenge he went blank.  He says it is not about the money for him, it is about playing the best game he could.   Ozzy says he use to be afraid of nature but he is not anymore.   He felt that the weight of it all was too much for him.  The pressure to win.   Ozzy tells Jeff it was more about winning than the money.

Jeff says does not get it he dominated, dominated the game and puzzles are his thing and then he lost.  Ozzy tells him he beat himself, he did not focus, it slipped away and he went blank and it was like he was having an out of body experience.

Jeff wants to know what has the reaction on the street to Cochran.  Cochran says in person it is positive but on the internet everyone hates him.    Cochran says when he played all his theory went, he got into a defensive posture and it did not work.  Cochran claims emotionally it was difficult for him because he was viewed as a joke rather than a strategic mastermind.  He says it was difficult because he likes to be liked.  Cochran says the game changed him because he use to be nervous when he went into bars or real world situations but now he is better.   Cochran tells Jeff he is not dating anyone and he invites girls to come at him :-)

Jeff asks Brandon what was tormenting him in the game it seemed to be good, evil, good evil.  He tells Jeff he has strayed off things a few times and he has a wife and two children and he has decided to be a better person and do the right thing.  He wanted to make sure he never was the person he use to be.  Unfortunately, he says not all his family is happy how he played and his uncle Russell was really not happy.  No one from his family accepted how he played.   Brandon says a lot of his family are not very proud of him.

The winner of the Sprint award of $100,000 and the biggest margin of votes OZZY!

Dawn says Survivor for her was about challenging herself.   Keith and Whitney go public they are a couple.  Whitney says it was life changing experience and you have to trust people and you get close to people very quickly.

Edna says she got home and her husband saw her so different that she got pregnant.  Christine formed an unlikely friendship with Stacy and they are still close.

Jim says what he would he do different if he came back was to understand peoples motivation.

We get a glimpse of Season 24 of Survivor. Coming In February 2012 Survivor One World.  On Season 24 the tribes will live together on one island and determine if they will share their resources.

Enjoy the holidays!!  We will be live blogging all the shows in February 2012!