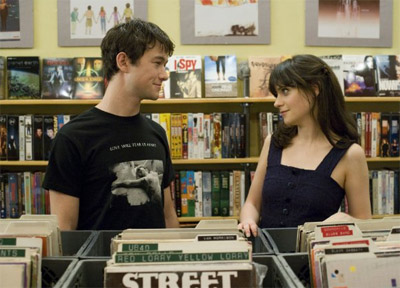 The co-stars of the 2009 film, Zooey Deschanel and Joseph Gordon-Levitt, recently recorded a super-cute cover of the Nancy Wilson song, “What Are You Doing New Year’s Eve?”

In the description of the video, the New Girl actress wrote:

“I have known Joe Gordon-Levitt for going on 12 years. We first met in the summer of 2000 while doing a tiny movie called Manic, where we bonded over a mutual appreciation for Harry Nilsson and Nina Simone and I have been lucky enough to call him one of my dearest friends ever since.

When we did 500 Days of Summer 8 years later, we spent every lunch hour dancing to Marvin Gaye in the hair and make up trailer; we had loads of fun. I hope to do a thousand more movies with him because he’s simply the best. But in the meantime, we made a little New Year’s duet for all of you!“

However, with both Zooey and Joseph recently getting out of relationships (Zooey split from her husband of two years Ben Gibbard last month, while Joseph is back on the singles scene after a rumored fling with Scarlett Johansson,) perhaps the two will become more than friends in 2012?

Watch their duet below.