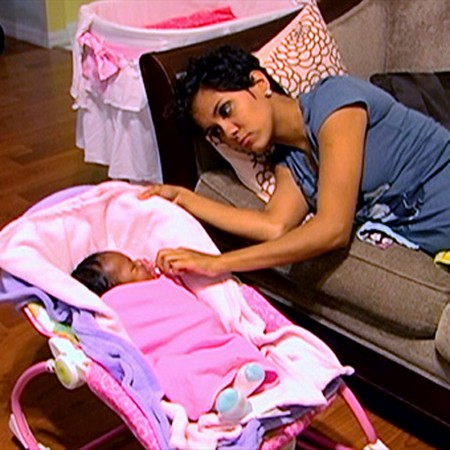 Another emotional episode of 16 and pregnant aired and we got to meet Briana Dejesus and her baby Nova Star.  We have a review of the show here for you.  Briana was born in Brooklyn, New York but now lives in Orlando Florida with her sister Brittany, their mom and dog Prince. She graduated a year ahead of her class. She is your typical teenager who loves hanging out with her friends and taking pictures.

Growing up we find out Briana’s father wasn’t around much so her mom stepped up to be there for Briana and her sister Brittany. We find out Briana and her boyfriend Devoin broke up a month ago, but all that changes when Briana wants to work things out on their relationship because she is pregnant with their child.

Briana tells us telling her mother she was pregnant was scary; because it was around that same time we find out her sister was pregnant herself. We learn soon after Briana and Devoin keep the baby since they were together at the time and Brittany, her sister and her boyfriend abort the baby because her boyfriend wasn’t supportive of the baby.

Briana tells her mother the news she is expecting her baby by writing her a letter. Her mother like any mother felt nausea and just a sick feeling. We later find out by Brittany that her mother wanted Briana to abort her baby. Briana didn’t want to do that following the footsteps of her sister, so she decided to keep the baby whereas the mom feels she failed at being a mother from moving them to Florida from New York.

Devoin, Briana’s ex-boyfriend graduated high school, and we learn from Briana on why they broke up because he was always with his friends and not spending time with her. Since they aren’t a couple anymore and they were going to name the baby together, Briana decided to name the baby with the help of her mother. The two decide on Nova because her mother says quote “It’s a birth of a star” after telling her it fits. She goes on to say it’s “Cosmic universal.”

Brittany, Briana’s sister, gets some of Briana’s friends together for an all girl’s arts and crafts party where they make t shirts. Brittany makes a point to her sister about the birth of the upcoming baby, “Looking at you with your daughter people are going to automatically judge you” meaning people who stare at her.

Briana reaches out to her ex and lets him know of the name she picked out. They conflict back and forth that Devoin needs to be there and get a job to help out with their babies needs because Briana doesn’t want to keep relying on her mother for help.

Briana and her mother go in for a regular sonogram appointment. Briana reached out to her ex and of course he was a no show. Back home conflict arises when Briana tells her mom she is hungry and wants food. Brittany looks on and gets frustrated of her sister’s neediness and their mother jumping into action of doing what Briana says. Brittany makes a point loud and clear just to show us how needy Briana is “She’s pregnant, not crippled!” Briana is getting frustrated with her mother because we see her in the living room wanting to watch the sonogram on DVD with her mother who is in the kitchen fixing a meal Briana wanted. Brittany who gets frustrated with her sister and her neediness towards their mother she takes off.

Briana and her friends take off to enjoy a haunted house for Halloween only when they got back home, Briana started going into labor by getting labor pains. She goes to the hospital and on the way she calls Devoin who surprisingly meets them at the hospital just in time for the birth of their daughter. Only to be short lived when the next morning after the birth of their daughter, Devoin takes off to play basketball with his friends.

Briana is finally able to go home with her new baby. Devoin finally comes around and comes to visit his new born daughter at Briana’s house. Tension arises when Brittany, Briana’s sister notice Devoin phone going off and him checking it. Soon Briana’s mom chimes in and talks to Devoin about his new role as a dad, but only to be mad just like Brittany when Devoin keeps paying attention to his phone and not Briana’s mom.

Frustrated Devoin who came with a friend to Briana’s house, leaves after saying goodbye. After having a heart to heart with her mother, Briana goes to a local college with her mother to see what kind of opportunities they offer. Later the next day is Halloween and Briana sees firsthand how lonely it is to be a new mom while her friends are out enjoying a haunted house. Briana notices just how much her life has changed when her friends take a picture from the haunted house and texts her a picture.

In the end we find Briana is determine to work things out with Devoin in sake of their daughter Nova. Surprisingly Devoin texts Briana to tell her he wants to meet up with her at a restraint and not at her house. So she agrees to have dinner with him and brings Nova in tow.  But it was a no show when Devoin stood Briana up and she had to text her mother to pick her and the baby up from the restrant

Later back home Briana confides in her sister that if she had to do things over, she would have gone the abortion way but makes it clear she doesn’t regret having Nova. Briana praises Brittany for aborting her baby and even states she would trade places with her. So Briana moves on from Devoin and focuses on their daughter Nova.