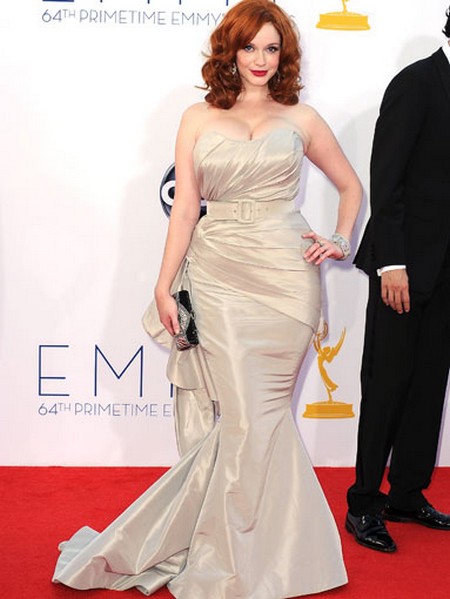 Did you tune in to the 2012 Emmy Awards last night?  If you did, were you watching to see who actually took home awards or were you a typical girlie girl and there for the fashion? I’ll admit I always love a glimpse at who is wearing what and so here at CDL we’re going to take a look at some of our favorite stars from last night. The biggest question (besides who would win) seemed to revolve around Emmy cleavage- to bare or not to bare it.

Let’s start with mega hot redhead, Christina Hendricks, who nearly always hits a huge WOW factor. She hit the red carpet in a vintage looking Christian Siriano gown that was deadly. The silver played off Christina’s skin beautifully but you noticed that second. First was the major cleavage (which we all know she has in any outfit!) and from the side I have to say, I wondered how everything was staying up and so in place! I love this lady though. She has that old Hollywood look that never goes out of style.

Claire Danes took an approach completely opposite of Christina’s. Instead of drop dead cleavage, she went strapless and focused heavily on draping in her bright yellow Lanvin dress. In my head I knew that Claire is pregnant but this dress made me double check because while the dress might be roomy, she really has no hint of a baby bump, yet. What she does have though is an Emmy for Leading Actress in a Drama thanks to her bang up role on Homeland!

Emily VanCamp is another lady that wanted to give viewer’s a little something to see. She’s wearing a pale grey, 1920’s-ish art deco inspired gown by J. Mendel. It’s definitely sheer at the top not really exposing much, more like outlining her chest. This dress drew some raves but I didn’t love it.

Ginnifer Goodwin nearly always strives to be a bit different on the red carpet and I have to say, I loved her look. She opted to keep things covered in an absolutely stunning Monique Lhuillier dress. It was ladylike in nude with burnt orange detailing.

January Jones opted for subtle cleavage in a Zac Posen number. I’m a little conflicted on this black dress because while I don’t care much for the cut out bandage top of it I’m in love with the way the skirt drapes and falls.

Zooey Deschanel did something I hate. If you are small on top then don’t pour your boobs into a tiny strapless number that is cut like an 80’s prom dress. And the top of this Reem Acra dress is. It’s Cinderella-esque and it’s another case of hate the top but love the bottom. The skirt is stunning in the way that it falls at an angle.

Lots of people seem to love Kat Dennings and they also love her assets, which were on full display in a vixen red J. Mendel dress. I didn’t love it. In fact I’m sure a much cheaper version of this can be found in any Forever 21 store.

I think photos really don’t do Julianne Moore’s Christian Dior Couture gown justice. Lemon yellow is not a color I’m ever inclined to love and as a redhead I can tell you it’s also not a color we can usually pull off. But on camera this actually worked somehow. As a presenter Julianne looked stunning.

Precisely the opposite of Julianne’s covered up look is the predictable Sofia Vergara falling out of her Zuhair Murad fishtail gown look. I know that she has a killer body, but at some point (and age) it’s time to tone it down just a bit. I think Sofia is there. Maybe she’ll aim for class next time rather than a figure skating costume with a long skirt? Or not.

Hayden Panettiere absolutely stunned in a Marchesa, off the shoulder blue gown. Covered yet sexy. Sofia Vergara should study this look.

It looks to me like Heidi Klum was making a statement- come and get it- er, single and ready for fun! Love the pale blue green of this Alexandre Vauthier gown but the cleavage to the waist and slit to the thigh was a bit much.

And what the hell was Nicole Kidman wearing? It looked like an embellished t-shirt that was turned into a full length dress. I’m not familiar with Antonio Berardi’s collection but if this is any indication I also don’t need to be!

Kelly Osbourne was actually one of my very favorites off the evening. Only she could match purple hair to her purple, off the shoulder Zac Posen dress and make it work! I though she was gorgeous and showed just enough to be sexy as well.

Those were some of the standouts for us here at Celeb Dirty Laundry, now it’s your turn. Who do you think had the best Emmy style? Tell us in the comments below!