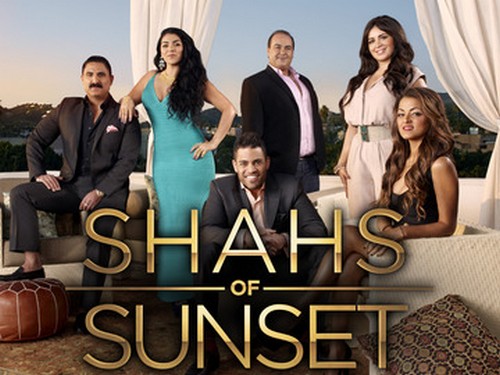 What is it about the month of December that puts everyone into countdown mode? Either you’re counting the days til Christmas or until you see extra family- at the very least you’re checking off days until you get a break of some type thanks to the holiday season!  Here at CDL we’ve decided to do a countdown of our own related to television. If you’re like me, then you have that must-see list of shows that you watch each week without fail and then your friends are suggesting others that you should check out as well. We’ve compiled a list of shows that deserve a peek or a second chance in some cases.  I strongly suggest you set your DVR’s to record an episode or two of some of the shows on our list because if you do, I’m going to bet you’ll thank us later when you’re hooked!

We’re going to kick off our countdown with Shahs of Sunset which airs on Sunday nights at 10pm. On Bravo.  I know exactly what you’re thinking, Not another reality show!  I’m half thinking it too but we always have room for more, don’t we?  This show follows a group of friends who are trying to juggle their active social lives and up-and-coming careers while balancing the demands of their families and traditions. They try to blend into a heavy duty party scene while being pressured by the old customs and traditions of family.  They want to enjoy the benefits of working and playing hard, but at the end of the day their families want them settled down and married to another Persian community member.

Reza Farahan is like a leader of this group. As season two begins he declares himself smack in the middle of a “gaylife crisis” and even that pornstache that he sports isn’t making him confident in his relationship with his current boyfriend. He also is at the boiling point in terms of some life-long resentment towards his grandmother.

Mercedes “MJ” Javid seems to see the wisdom in her mother’s wanting her to find a nice Persian guy to settle down with but MJ really likes the party-chick lifestyle that she leads. She is facing one heck of an internal struggle over fun vs. stability.

Mike Shouhed finds himself in a situation that is familiar to many. He may have found the girl of his dreams but she’s not Jewish and that detail makes any relationship between them completely unacceptable to his family.

Every reality show seems to have a wannabe pop princess and in this case it’s Asa Soltan Rahmati.  The problem is that her finances are a mess and trying to find a distributor for her Diamond Water (no really, diamond water) is proving pretty tricky since not many of us can afford it in the first place!

Golnessa “GG” Gharachedadhi is the resident hothead. Her killer looks are often canceled out by her unapologetic and abrasive personality. She also loves weapons. Knives and guns to be exact.

Season two of Shahs of Sunset begins tomorrow night on Bravo. Take a peek at it and tell us what you think. You might just find yourself hooked. Hey, no one thought they would really want to watch a Kardashian sister try on shoes while talking on her cell and yet millions tune in each week!