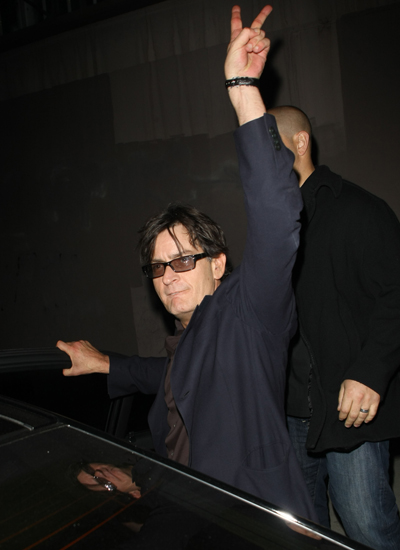 Is Charlie Sheen back on “the drug called Charlie Sheen?” He certainly seemed more than a little inebriated, when TMZ caught him leaving a Guns N’ Roses concert recently in Los Angeles, slurring his words and acting like…well, Charlie Sheen.

Among the highlights of the car-side interview, the 46-year-old former Two and a Half Men star claimed that the concert was “awesome” but wondered where Slash was. He also yelled out “Palin in 0-12,” as he got into his car, seemingly giving a presidential endorsement to the former Alaskan governor. Related: Chuck Lorre Is Still Trying To Hurt Charlie Sheen

When asked what his favorite Guns N’ Roses song is, Charlie answered with a knowingly look, “Mr. Brownstone … imagine that?!” referencing a slang term for heroin. And as his car pulled away (no doubt to the relief of the other people in his entourage,) one of the cameramen boasted that he “partied like Charlie Sheen,” to which the actor replied, “And you’re still alive?“

Although Charlie Sheen may not be capable of sobriety right now, we can at least be grateful that he uses a chauffeur.