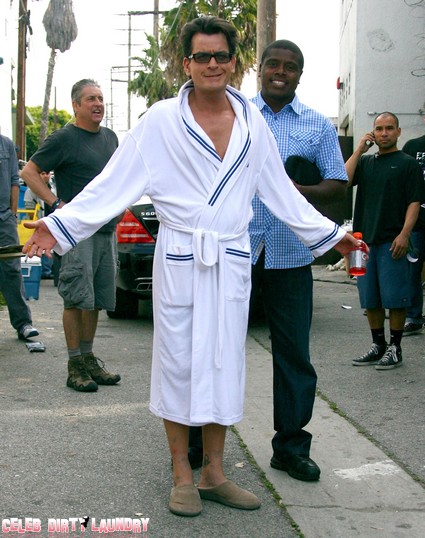 Charlie Sheen, better known as Charlie Harper in the US sitcom “Two and a Half Men”, has been threatened legally over his use of photos of himself to promote the new upcoming show that he’ll be starring in, “Anger Management.” The owners of “Two and a Half Men” have formally told Charlie to stop using what they consider their photos for promoting his new show ‘Anger Management.’ Probably at Chuck Lorre’s behest, lawyers of Warner Bros. sent a cease and desist letter to Charlie and the makers of ‘Anger Management’ claiming ownership of a couple of pictures of Charlie from his time on ‘Two and a Half Men.’ Stop using your own pics Charlie – or else!

The world is strange in the sense that a person can lose the rights to their own image. Of course we can understand Warner Bros. wanting to protect their property rights but couldn’t they give poor old Charlie a break here? I mean do they think that the current incarnation of ‘Two and a Half Men’ can get any worse if Charlie’s pics are used to promote ‘Anger Management?’ Ashton Kutcher will remain a dud regardless of what Charlie does.

I find this incredibly stupid, what’s the big deal of him using two measly photos to promote his upcoming new show? It’s obvious that “someone” still has a grudge against him, well Chuck Lorre to be exact. Charlie WAS ‘Two and a Half Men’ and everyone watching the current Sheenless production can see just how critical he was to the show’s success. Lionsgate Television and Debmar-Mercury which are producers of Anger Management decided to not comment on the letter. What comment can we expect from Charlie on this latest round in his war with Lorre?

Do you think Charlie should be allowed to use his own images? Or are they not really his any longer? Should permission have been obtained from Warner Bros. before using the photos?