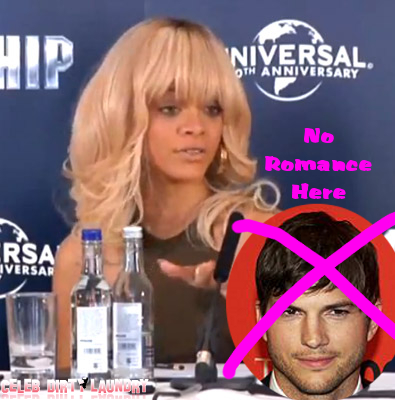 Rihanna, in a press conference for her new movie Battleship, was asked about her private life and straight-up told the crowd of reporters that she’s a single lady. So take that, world! After rumors of her and Ashton Kutcher being romantically involved hit the Celeb-HookUp Gossip circuit a few days ago, everyone’s been extremely curious.

I know some of you wanted this to be true, but, unfortunately, it appears as if they’re not a couple. So what was that late night gathering between the two all about then?

A reporter asked Rihanna at the conference:

“You’re so good at connecting with people that I think that we actually feel we know you. Things are clearly going brilliantly in your career. I just wondered if you are as happy in your private life and will we see a certain Mr. Ashton Kutcher perhaps making a trip over here?”

Apparently that was the wrong question to ask because the actress/singer was quickly angered.

“Wow. How disappointing was that question?” she said. Reportedly she let out a few awkward chuckles and sarcastically added: “I’m happy and I’m single, if that’s what you were really asking.”

There you have it, folks. Rumor = SMASHED! But the question now is: Do we believe her?

The rule of thumb for celeb couples is that they *usually* deny they’re seeing each other once or twice before they admit to anything. Do you think we’ll see them strolling down the street arm-in-arm anytime soon? I honestly don’t know. My celeb-romance-spidey-sense isn’t tingling much on this one.

Watch RiRi’s reaction to the question:

Leave us your thoughts in the comments section below! We want to hear from you.