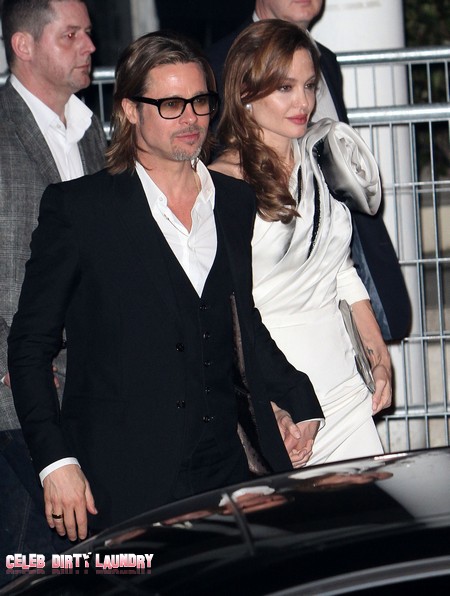 The good news has arrived that Angelina Jolie And Brad Pitt have reconciled and will be getting married this summer!  It seems that recent fighting between the two has finally ended and the couple are back in love.  Angelina has always resisted getting married but even she is now keen on tying the knot.

According to OK! Angelina is pregnant with twin boys and she and Brad want to be married before they are born.

One cause of the recent tension between Brad and Angelina was her flirting with her ex-husband, Billy Bob Thornton.  Brad was left crying with jealous rage after Angelina hooked up with her ex in Europe under the guise of discussing his autobiography.  He didn’t want Angelina anywhere near Billy Bob but she asserted her independence and this crushed Brad.

In any case, all that nastiness is now water under the bridge and it looks like smooth sailing all the way to the alter for Hollywood’s most beautiful couple!

OK! Mag sources a confidante of the couple who reveals in the March 26 print edition:

After a frosty two weeks following a bitter argument, the tension between Angelina and Brad has finally broken – and the couple are once again planning to marry before the arrival of their twin boys.

“They had an amazing time Oscar weekend,” says a confidante, who adds, “since then, they’ve been madly in love.”

“The wedding was totally off: They were having so many arguments, but they’ve finally managed to bury their differences,” explains the confidante, adding “Angie is expecting twins this fall, so it is making them feel a time crunch.  They decided they’d both like to welcome their twin boys to the world as man and wife, which means the wedding has to happen fairly soon.  They’ve both realized how much they want to be together.”

“Angie really wants to have the wedding in France at their chateau.  She thinks the grounds are perfect for a wedding, and she loves the fact that they could keep it all very top secret.” the confidante reveals.

The 35-bedroom chateau has been the family’s summer hideaway in the South of France since 2008.  Angelina rested there during most of her pregnancy with twins Knox and Vivienne.  It has everything one could ever want for a wedding. A huge house.  Lush grounds, a lake, vineyards, and even its own chapel.

“Angie’s been fighting Brad on it for years and then, just they started to plan it, their relationship got so rocky they both backed out, explains the confidante.  “Now that the sun is shining on them again, Angelina seems to quite eager to tie the knot.  She’s finally ready to be Mrs. Brad Pitt.  She’s actually getting really excited about it!’

Are you excited about Angelina and Brad getting married this summer?  And what about Angelina having another pair of twins!  Let us know what you think in the comment section below.