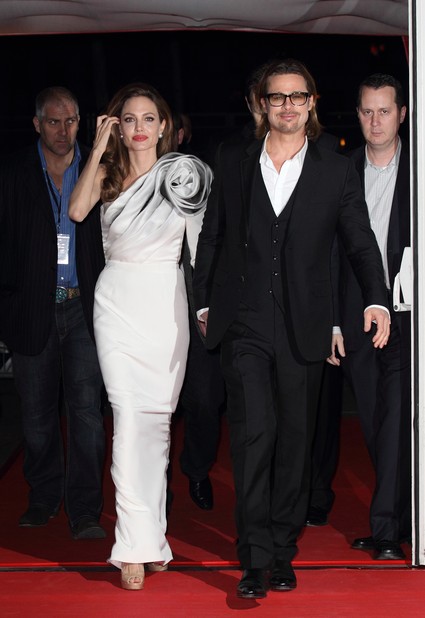 Angelina Jolie said she might dump Brad Pitt and get back together with her ex-husband, Billy Bob Thronton, and this caused poor Brad burst into tears. Reports are that a broken-hearted Brad ran out of a Berlin restaurant in tears after cruel Angelina revealed her plans to reunite with Billy Bob.

Brad was loyal enough to fly to Germany to accompany Angelina to the February 11 premiere of her critically acclaimed film, In the Land of Blood and Honey, at the Berlin International Film Festival. Poor Brad got quite the slap in the face when he learned that Angelina was planning to hook up with Billy Bob, who was at the festival for his film Jayne Mansfield’s Car.

According to sources: “Angelina had contacted Billy Bob under the pretext of congratulating him on the film, but then asked if they could get together. He agreed to meet, and the two began talking on the phone and e-mailing behind Brad’s back. After the premiere of her movie, Angelina and Brad dined at Berlin’s Zosimo restaurant, where she admitted how excited she was about seeing Billy Bob again.”

“Brad flipped out – first he said, ‘No, you can’t!’ But then Angie laughed in his face and said, ‘Oh, yes I can…and I am.  Brad is shattered and feels totally betrayed. He had flown to Berlin specifically to be by Angie’s side to support her and her film. He was so upset and caught off guard that she could be so cruel that he ran off in tears.  The actor quickly packed his bags and hightailed it to London where he attended the BAFTA Awards alone.”

What’s even worse is that Angelina insists on a complete double standard in her relationship with Brad – while she is free to whore around as she pleases, Brad is not allowed to even glance at another woman, nor even mention their name, especially not Jennifer Aniston.  “It’s completely unfair, Brad has always put up with it because he loves her, but he’s not willing to do it anymore.”

Billy Bob is not one to miss an opportunity to boast was quick to say at a Berlin press conference: “Angelina’s a wonderful woman and one of my best friends in the world.  I’ll love her until the end of my life, and she’ll love me.”

Angelina admitted her strong feeling for Billy Bob in 2008:  “I still love him dearly and think the world of him.  I’m proud to have been his wife for a time.”

According to a friend Brad is threatened by Angelina’s chemistry with Billy Bob:  “Brad warned her that there will be consequences if she really goes through with seeing Billy Bob. He’s not going to put up with her ignoring his feelings anymore.”

Why don’t Angelina and Brad Get Married? Could it be that Angelina doesn’t want to be restricted in her pursuits? Let us know in the comments below.