Angelina Jolie Confesses That She Cheated On Brad Pitt (Photo) 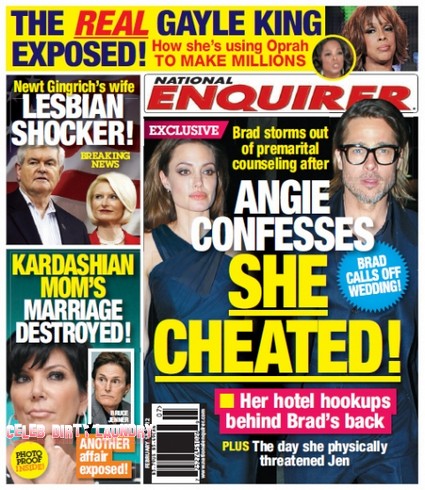 The current issue of the National Enquirer claims Angelina Jolie has come out and confessed to her long-term partner Brad Pitt that she cheated on him! After 6 years together is seems that it was Angelina who got the 7-year itch – we thought it was men who got that… . While it was always Angelina that came across as jealous of Brad – it turns our that it’s Brad who needed to worry. Recent rumors that the couple are getting set to marry could be jeopardized in light of this revelation.

In the latest issue of The Hollywood Reporter the surprisingly candid Brad says a previous promise to wait until gay marriage is legalized as a show of support might not happen:  ‘We’d actually like to [get married] and it seems to mean more and more to our kids. We made this declaration some time ago that we weren’t going to do it till everyone can. But I don’t think we’ll be able to hold out’.

Well that was then, and this is now… .  And what about the revelation that Angelina is pregnant with twins! In light of Angelina’s cheating admission can we be certain that the twins are Brad’s? Can he? The current issue of OK! Magazine features a cover story this week claiming that Angelina Jolie and Brad Pitt are pregnant again with twin boys. This would make 8 children and the second set of twins for the couple who are already parents to Maddox, 10, Pax, 8, Zahara, 7, Shiloh, 5, and twins Knox and Vivienne, 3.

Angelina stole Brad from Jennifer Aniston and everyone knows it. She had no problem stepping into another’s relationship and wrecking it – just to get a little cheating sex. As wonderful as Brad is – some say the sexist man in Hollywood – he is still 12 years Angelina’s senior and is in fact old enough to be a young grandpa. Could Angelina be seeking a toyboy for a little frisky action? Is this Angelina’s 7 year itch?