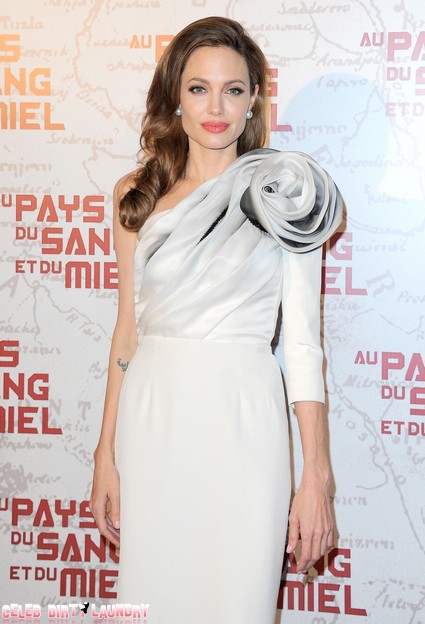 Angelina Jolie has been marked for death by terrorists with global reach from the former Yugoslavia. Angelina has raised the fierce ire of bloodthirsty murderers who were responsible for countless deaths and much torture during the Yugoslav Wars. Her film, ‘In the Land of Blood and Honey’ exposes some of the horror that took place during the Yugoslav Wars and apparently some very bad people don’t appreciate Angelina’s take. After Yugoslav dictator Tito died in 1980 ethnic tensions grew out of control between Yugoslavia’s constituent provinces and eventually exploded into bloody war and genocide – ‘ethnic cleansing’ being a euphemism used frequently during the turmoil.

What seemed to trigger this outburst of anti-Angelina feeling was her film’s premiere in Sarajevo on Tuesday – Sarajevo being the capital of Bosnia and Herzegovina where much of the horror of the war transpired.

Jolie told the Guardian:  “There were things sent to me, there were things posted online,  A member of the cast had the windows of their car smashed and another had their emails hacked.  Emails were sent out [from the hacked addresses] saying they were from them and saying they had been hurt.  It was a scary thought that someone was thinking along those lines.”

The Guardian reported that outside of Sarajevo, many theaters are refusing to show the movie. The paper further claimed that the film has succeeded “in exposing the depth of the rifts in a country that many fear is moving away from reconciliation and drifting once more towards dangerous instability.”

Jolie said that what bothers her most is that some people in the region “are deciding to label [the movie] without having seen it, and try to incite aggression and violence.”

Speaking at a news conference Angelina continued:  “It’s not just a simple threat, it’s not my safety I’m concerned about.  There is so much hostility and aggression where I don’t know if they are able to see the film clearly at this time.”

BBC special correspondent Allan Little wrote:  “The film, for all its harrowing honesty reveals a country unreconciled to its painful past, and bitterly divided still even on the question of what really happened here almost 20 years ago.”

There are people out there who would do others harm for exercising their freedom of speech. Don’t be intimidated Angelina – keep making movies that address serious topics seriously. Suppressing the truth is not the way to a better future.