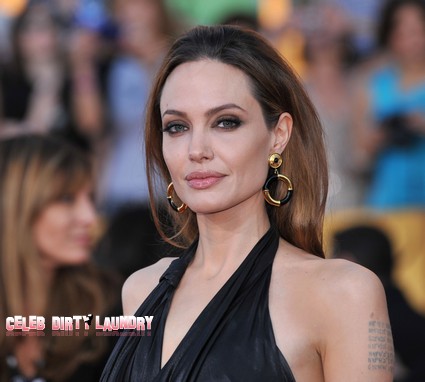 Vanessa Paradis hates Angelina Jolie. Why, because she blames her for ruining her de facto marriage to Johnny Depp by sleeping with him during filming of The Tourist. Now it all makes sense – Angelina Jolie has admitted to cheating on Brad Pitt as we reported here on Celeb Dirty Laundry – and now we know with whom! Furthermore, it has been widely reported that it’s all over but the crying between Vanessa and Johnny and that they are living sad and separate lives.

We reported here on Celeb Dirty Laundry one month ago that Vanessa and Johnny were going to split up. We speculated at that time perhaps it was because Johnny was having a mid-life crisis – but nobody suspected that his crisis included sleeping with Angelina. Working together so intimately on The Tourist must have proven a temptation neither celeb could resist. Johnny even insisted on cutting certain steamy scenes from the film before he would sign off on its release. Now it seems he should have done the editing on his own behaviour… .

When Johnny went to work in Venice with Angelina on The Tourist in 2010 Vanessa started freaking out about her darling man working with the known homewrecker. Just ask Jennifer Aniston about what happens when Angelina gets close to ‘married’ men… .

According to the National Enquirer:  Angelina Jolie is the reason Johnny Depp’s relationship with longtime love Vanessa Paradis is on the rocks, say sources. Vanessa believes Johnny cheated with Angelina during the making of The Tourist, and that’s what tore their 14-year-relationship apart!

“It’s no coincidence that things began to unravel for Johnny and Vanessa when he started working with Angelina on The Tourist last February. Vanessa was absolutely convinced that Johnny slept with Angelina, and her jealousy and suspicions ended up destroying them.”

“Vanessa was against Johnny working with Angelina in the first place,” revealed an insider. “She firmly believed that Angelina stole Brad Pitt away from Jennifer Aniston and felt she’d do the same with Johnny.”

Vanessa begged Johnny to pull out of the project, and failing that, she demanded that a steamy shower sex scene be cut from the script. Still, insiders say the off-screen chemistry between Johnny and Angelina on the Venice set with obvious to everyone.
“Angelina and Johnny were constantly hanging out, cracking each other up,” divulged a source. Meanwhile, Vanessa has denied reports that she and Johnny are splitting up, but the insider insists they are, adding: “Angelina drove a wedge between them.”

Meanwhile for Vanessa’s added pleasure rumors are growing stronger that Johnny and Eva Green are making it together. Vanessa, where there is smoke there is usually fire.