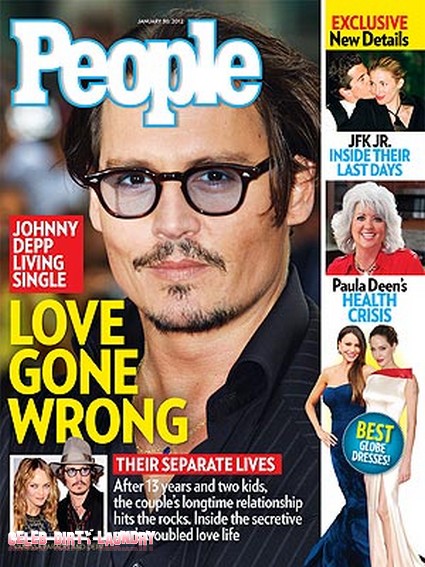 The current issue of People Magazine features the cover story ‘Johnny Depp Living Single – Love Gone Wrong.’  The magazine claims that after 13 years together and two kids, Johnny Depp and Vanessa Paradis’ longtime relationship has hit the rocks.  People has the detauls of the secretive stars troubled love life.

People has more: Johnny Depp, 48, and Paradis, 39, who are parents to Lily-Rose, 12, and Jack, 9, have not appeared side-by-side on a red carpet for more than a year. Multiple sources tell PEOPLE in this week’s cover story that the relationship is all but officially finished.  In fact, some in their circle say the couple of nearly 14 years have already split. Says one insider: “It’s so sad.”

Johnny Depp is considered one of the most stable family men in Hollywood and has been for years.  Johnny has been in a relationship with Vanessa, a French actress and singer whom he met while filming The Ninth Gate, since 1998 which is forever by Hollywood standards.

Also featured in this week’s issue the magazine has the pics of all the best 2012 Golden Globe award dresses.  Our pick for the evening was Angelina Jolie who we think stole the show in her Versace dress.

To find out more about Johnny and Vanessa and Johnny’s solo night out, pick up the current issue of People Magazine on stands Friday!