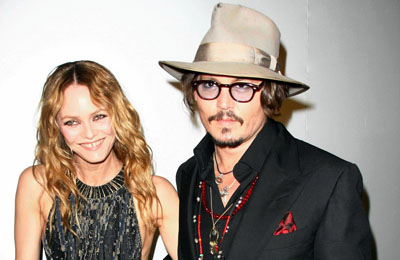 Are Johnny Depp and his longtime love Vanessa Paradis headed for a split? That is what RadarOnline is reporting about the couple, who have two children and have been together for more than ten years.

According to the website, the relationship between the 48-year-old Pirates of the Caribbean actor and the French singer, 39, is falling apart, and the two have been constantly arguing in the last few months.

“Johnny isn’t handling anything well right now,” said a source to RadarOnline. “People around him are worried about how Johnny is doing because he and Vanessa seem so fractured right now. Their relationship is heading toward the end.”

Although the specific source of their fighting wasn’t identified, the couple has always had a somewhat unconventional relationship, and Star Magazine via Celebitchy.com reported last month that Johnny was currently going through a “mini mid-life crisis” and drinking a lot and that Vanessa wasn’t putting up with it.

“Johnny has started reaching out to lawyers, probably to quietly discuss how to get out of the relationship. They’re not married but they’ve been together for years and have kids together so it isn’t as easy as just breaking up,” added the source.

With all of the celebrity breakups as of late, we wouldn’t be surprised if Johnny and Vanessa become the next couple to call it quits.