Daniel Radcliffe On His Romantic Life: ‘I’m Not An Easy Person To Love’ 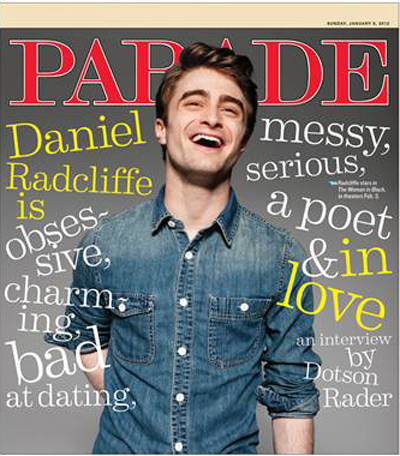 Dating Harry Potter isn’t easy! That’s what Daniel Radcliffe recently revealed during an interview for Parade Magazine.  Although his relationship with girlfriend Rosie Coker is going well, the 22-year-old actor, who will star in the upcoming film The Woman In Black, admits that he’s not that great of a boyfriend.

“I’m not an easy person to love. There are lots of times when I’m a very good boyfriend, but there are times when I’m useless. I mean, I’m a mess around the house. I talk nonstop. I become obsessed with things. This year it’s fantasy football, which means Rosie has to listen to me talking 24 hours a day about this team. ‘Should I take this player out, do you think, darling?’ And she listens to it, and she loves me for my oddness, my awkwardness, all of those things that I hate about myself. She finds them cute. I guess that’s love,” he told the magazine.

Daniel also revealed that when he first started dating Rosie, whom he met on the set of Harry Potter, he leaned in for a kiss on their second date but chickened out and kissed her on her neck instead, a move he calls right out of the “Bela Lugosi Book of Woo.”

Still, despite his romantic fumbles, Daniel admits he’s a romantic and would love to get married someday:

“When growing up, I thought of marriage as being very official, drawing up a contract. It seemed slightly clinical to me. But then you meet somebody that you really love and you think, ‘Actually, I wouldn’t mind standing up in front of my friends and family and telling them how much I love you and that I want to be with you forever.‘”