Brad Pitt Worried This Year Won’t Be A Success 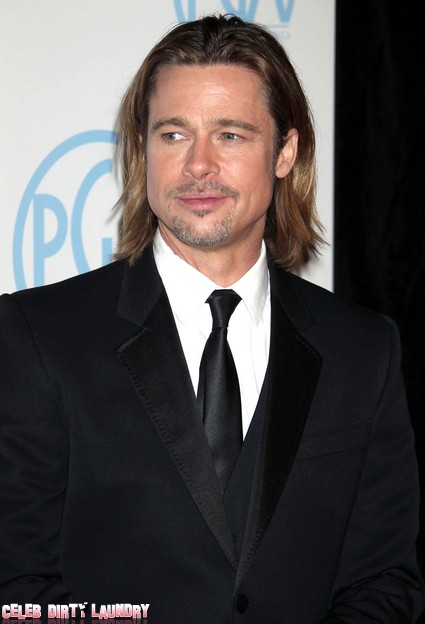 Brad Pitt is worried that this year won’t be as successful for him as 2011. Brad was focused on his acting career when he talked upon his lowered expectations for the current year but could he also be concerned about growing rumors that Angelina Jolie made it with Johnny Depp when the two filmed The Tourist? Reports have emerged that Vanessa Paradis is livid at Angelina – accusing her of being a man-stealer and spoiling her long-term relationship with Johnny for some quick cheap sex.

In any case, Brad is no stranger to Angelina’s devious ways as she stole him right out from under a much aggrieved Jennifer Aniston while Brad and Jenn were still married! Angelina knows just how dangerous a younger woman can be and that is why she hates Stacey Kiebler, George Clooney‘s squeeze, for her expressing sexual desire for Brad.

Brad said his two latest movies, ‘Moneyball’ and ‘The Tree of Life’ which have been nominated for 6 and 3 Academy Awards, respectively, might be a bit of fluke for him. While he thinks that too much emphasis is placed on winning awards, he knows that he has made his mark acting with these films.

To quote Mr. Pitt:  “We’re so defined by the last success or the last failure that we even start to see ourselves that way. You’ve got these awards and there’s going to be one winner and four losers, but the four losers made great films. A subtle point of ‘Moneyball’ is that we’re a string of successes and failures. Odds are I won’t have another year like this one for a while.”

Brad rose to fame after appearing in the 1991 movie, ‘Thelma and Louise,’ and believes he is a “good” actor now but there are still things he wants to learn – apart from whether Angelina slept with Johnny.

“I think I’ve become a good actor. I’m very sporadic but I think I’ve got some skills now. I’ll focus on that.”

Does this mean we can expect to see Brad playing a mob boss or maybe Abe Lincoln?  Winston Churchill or Jean Valjean perhaps?