A Royal Mystery: Murder At The Palace (Photo) 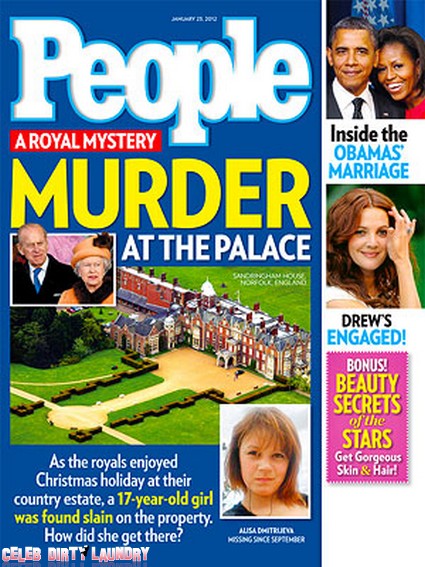 The current issue of People Magazine features the cover story ‘A Royal Mystery – Murder at The Palace.’  On New Years Day a 17 year-old girl’s remains were discovered New Year’s Day by someone walking a dog in a wooded part of Sandringham, the country estate where Queen Elizabeth II and the royal family traditionally spend the Christmas holidays.

People has more: “The royal family had just gathered for the holidays at the sprawling estate when a roving dog walker made a gruesome discovery: the body of 17-year-old Alisa Dmitrijeva, a Latvian immigrant and college student from nearby Wisbech, Cambridgeshire. She’d been missing since September and it took days to identify her. P “It could have been one of them who stumbled on the body,” one royal author tells PEOPLE. “The Queen must be very upset.”

Globe magazine is covering the same story as their cover this week and they claim to have the details of how Kate Middleton fled the scene and the chilling details.  Meanwhile An inquest was opened this week  into Alisa’s death but the cause of death is currently unascertained.

Also featured in this week’s magazine the magazine has a bonus for us – the beauty secrets of the stars.  We too can have their gorgeous skin and hair.

For more on the murder mystery at Sandringham, pick up the latest issue of PEOPLE, on newsstands Friday.