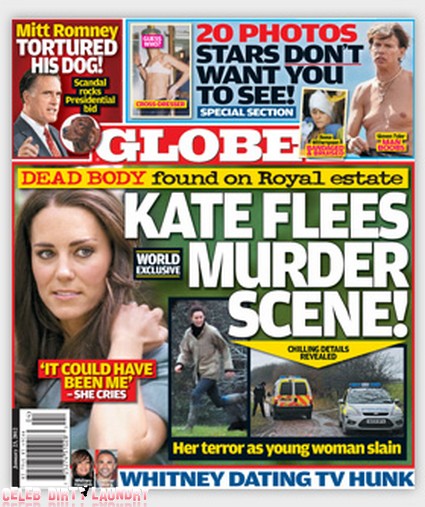 The current issue of Globe Magazine features the cover story features the cover story ‘Kate Flees Murder Scene.”  A girl’s remains were discovered New Year’s Day by someone walking a dog in a wooded part of Sandringham, the country estate where Queen Elizabeth II and the royal family traditionally spend the Christmas holidays.   The Globe claims they have a world exclusive of all the chilling details and how Kate Middleton, Prince William’s wife flees the murder scene.

Globe has more: Prince William’s wife Kate is living in terror after a woman was found brutally murdered at the very spot on a royal estate where the pretty Duchess had stood just hours before. “It could have been me,” Kate shrieked, as she insisted on fleeing the property, vowing never to return. Get all the horrific details in the new GLOBE.

The body was found about three miles from the royal residence.   The remains were those of a missing 17-year-old girl Alisa Dmitrijeva, a Latvian teenager who had been reported missing in August from her home in the town of Wisbech in eastern England.

Also featured in this week’s issue the Globe has a special section with 20 photos that celebs don’t want you to see.  One of the photos they have is a photo Celeb Dirty Laundry posted of Steven Tyler looking like an abused sponge.  Steven was on the beach in Hawaii.  He was in Hawaii with his fiance Erin Brady to have their house blessed by a local shaman.

To see all the photos the stars don’t want you to see and find out more details of Kate’s terror, pick up the current issue of Globe Magazine.