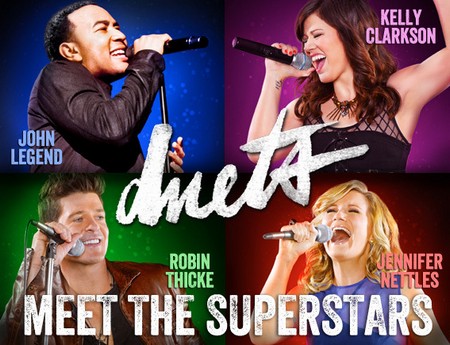 This new singing show is going to be like “none other before it” when superstars, Kelly Clarkson, Jennifer Nettles, John Legend, and Robin Thicke join contestants on the stage.

Now this is not the first time ABC has tried it’s hand at a singing competition, they already failed twice with ‘The One’ and ‘Karoake Battle USA’, so hopefully “three times a charm” because beating out rivals ‘American Idol’, ‘The X Factor’ and ‘The Voice’ won’t be easy.

This new one-of-a-kind singing competition won’t have the judges sitting behind a desk or swinging around in chairs, we’ll actually get to see and hear a lot more of them and hell, isn’t that why we watch these shows in the first place for?

The four Superstars will search America for new and undiscovered talent worthy to be their protégés. Each Superstar will pick two hopefuls to be their duet partners. Together, they will take the stage every week to perform for a live audience.

Only one duet will be the ultimate winner at the top of the charts and the protégé will win a recording contract with Hollywood Records.

The show will be hosted by Quddus, who is best known as the former host of MTV’s Total Request Live and he is very excited to be hosting this new “ground breaking” singing show, “To say that I’m excited to be the host of ‘Duets’ would be an understatement. This show is going to take the singing competition genre to the next level, and I’m absolutely honored to be a part of it”

Kelly Clarkson, who recently joined Blake Shelton as an advisor on ‘The Voice’ said, “The simple fact that I get to go out and find two people that I believe in, sing with them every week, and help them accomplish their dream is an amazing thing that I can’t wait to be a part of.”

Robin Thicke, who also lent his expertise to help Team Adam on ‘The Voice’ promises a singing competition like no other, “Duets is unlike anything that’s out there right now. The opportunity to work with such talent, both the other artists and contestants, is definitely going to make for an exciting competition.”

‘DUETS’ premieres on Thursday, May 24th at 8pm. I ask you, do we really need ANOTHER singing competition?  Don’t forget to come back to Celeb Dirty Laundry each week because we will be live blogging “DUETS” with all the up-to-the-minute details.  CDL your one stop shop for all reality TV and television series recaps!