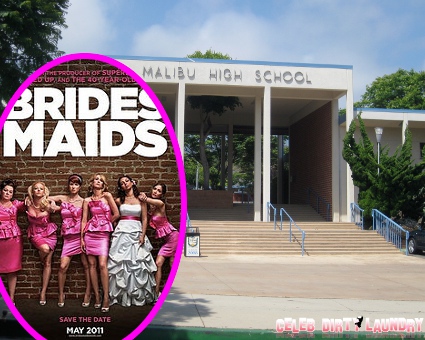 Bridesmaids made some headlines today, slapping itself on the cover pages, like a fat fish. Malibu High School became the scene of the controversy, with high school student Dionne Evans going to the police about her Bridesmaids crazed teacher. According to Evans, the teacher made her stand in front of the class and asked her, “Did you see Bridesmaids?” before whipping Evans’s face back and forth. (For those who do not catch the Willow Smith reference, she ‘slapped’ her.) The crazed out teacher, who is clearly a massive fan of Bridesmaids and the slapping game, was referring to the scene in Bridesmaids where one character (Wiig’s character) was slapped into “sense” by another.

The teacher released an official apology, but it seems that Evans does not agree with the teacher’s feeble apology. Her family hired the best in town, Donald Karpel, who is supposedly looking at civil and criminal prosecution. Why didn’t the teacher just drive past Evans’s house and pretended like no-one was driving the car? This would have saved everyone so much stress and could have been extremely funny in the process.

What does this little controversy teach the teacher? When in doubt, take to the street in a wedding gown, with a severe case of food poisoning. Don’t slap the kid who tweets too much in class, it’s really not that funny.

This is the scene from Bridesmaids that this crazy teacher was attempting to reenact: