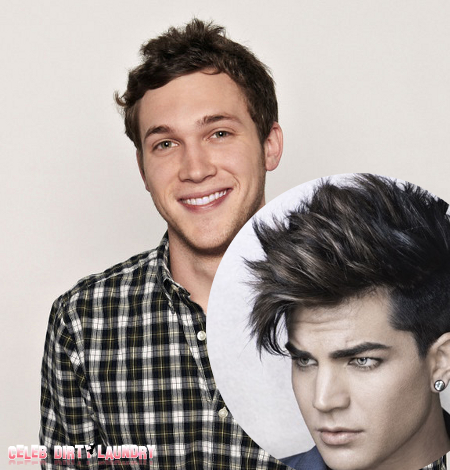 Adam Lambert has the hots for Phillip Phillips. Adam recently came out of the proverbial fan fave closet and exclusively told MTV News that he is, indeed, a Phillip Phillips fan.

We all watched the Adam Lambert/Kris Allen season, but in the end, Adam Lambert prevailed as the most successful Idol runner-up in the many seasons of the show. The Kris Allen fans are holding on to dear life, as their winner is quickly losing his foot hold in the music business. Yes, you may call me a Glambert, but I choose the Freddie Mercury-esque Lambert over the male-male-model-looking-vein-bulging Kris Allen any day. A burst of hope for the Kris Allen fans is that several US music critics have praised his latest album Thank You Camelia for its “gritty and warm hearted approach”.

Adam stated that the final three hopefuls were the best he had seen in quite some time, “I really enjoyed American Idol this year, I thought it was the best talent they’ve had in a while. The final three were amazing.” Don’t worry, Adam, we agree!

MTV News asked Adam if he agrees with a Phillips win and he said, “Yeah.  When it gets down to the end it’s not necessarily the best singer, it’s more about the majority of the voting audience and what style they’re into.”

Adam Lambert knows what he is talking about, as the singer not only survived an entire season of American Idol, but he is also doing extremely well on the US charts. His latest “Trespassing” album held a peak position on the US Billboard Album charts, as the finale of the 2012 Idol season came to a close. Kris Allen and Adam Lambert have been great friends ever since the close of their season, earning them the portmanteau of Kradam.

What do you think CDL’ers? Do you agree with Adam Lambert’s statements over Idol? Are you a Kris Allen fan or a Glambert and why? Let us know in the comments below and, remember, be lucid when posting a comment.