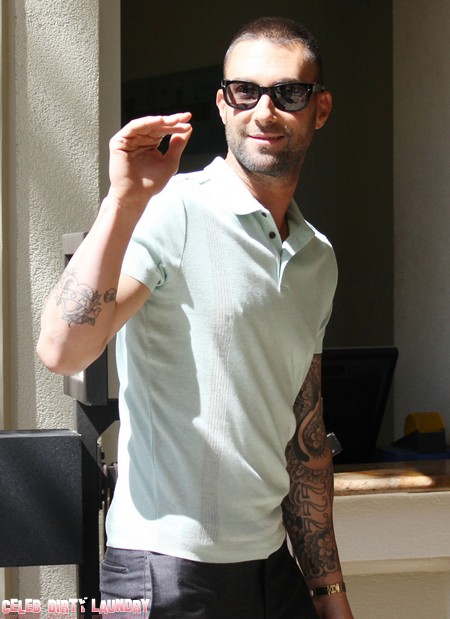 Adam Levine says that that since ‘The Voice’ has made his fame so intense he is concerned that his ‘words will come back to haunt him.’  Adam says that the TV notoriety he has acquired from ‘The Voice’ is more “intense” than that which he received with Maroon 5.  The ‘Moves Like Jagger‘ singer admits he wasn’t prepared for all the extra attention he has received since becoming a coach on the ‘The Voice.’

When asked about his increased fame since the pop star search TV show started Adam said:  “This has been very intense. I wasn’t really expecting it. I was very used to what had been happening with me and the band for many years, so it takes some adjustments and I’m getting used to it. Things like being surrounded by people asking questions like this are a little bit new for me. But it doesn’t really bother me very much and I stay relatively private most of the time so it’s all good.”

One thing that has definitely changed for Adam since he appeared on ‘The Voice’ – which also stars Christina Aguilera, Cee Lo Green and Blake Shelton as coaches – is that people now pay more attention to what he has to say.

Adam told OK! Mag:  “You need to be careful about what you say. It’s a kind of weird balancing act between carefully considering what you’re saying and then not worrying too much about what you say – as long as you don’t say anything absolutely terrible … But I like the fact people are listening to what I say now, at least a little bit more than they had before.”

Adam certainly seems to be doing a very fine job on ‘The Voice.’  In fact recently he attracted the attention of Jennifer Love Hewitt who told Ellen DeGeneres that the two of them would make a cute couple.

Do you think Adam is becoming a superstar celeb?  Let us know in the comments below.