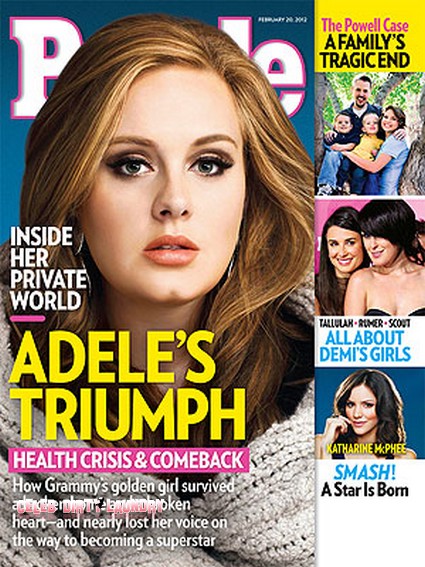 The current issue of People Magazine features the cover story ‘Inside her Private World – Adele’s Triumph.’  The magazine has all the details on hugely acclaimed British singer Adele‘s health crisis and her triumph comeback.  They have the scoop on how Grammy’s Golden girl survived a broken home, a broken heart and nearly lost her voice on the way to becoming a superstar.

People has the scoop:  “PEOPLE goes inside Adele’s private world, chronicling how she triumphed over the heartbreak that inspired her emotional songs, a broken home and almost losing her voice.   “She got to where she is through sheer hard work,” says Arthur Boulton, her teacher at London’s BRIT School.

She also succeeded by being true to herself. While Karl Lagerfeld recently called the singer “a little too fat,” Adele has always embraced her curves, and seems determined not to bend to body bullies.   “I’ve never wanted to look like models on the cover of magazines,” she says. “I represent the majority of women and I’m very proud of that.”

Adele – widely known for her latest album 21, recently confirmed that she will be performing at the 2012 Grammy Awards.  This will mark her ‘comeback’ live performance since undergoing throat surgery 5 months ago.  Her unfortunate medical issues forced her to cancel several performances and appearances, leaving fans wondering when she would return to the stage.  She will not only be performing, but the singer has earned six nominations!

Adele released a statement saying, “She is immensely proud to have been asked to perform at this year’s Grammy Awards”. So are we girl, and I’m certainly looking forward to it.

To find out more about Adele, her health crisis, her boyfriend and her rough childhood – pick up the current issue of People for all the details!