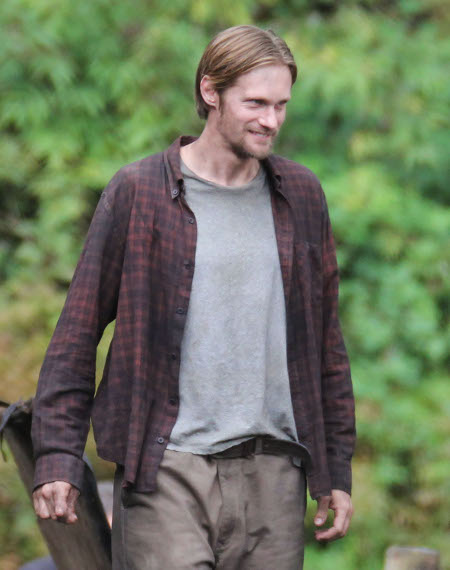 Alexander Skarsgard is doing a film again. We’re all still hunting down the bastard who cast him in that craptastic Battlefield and who gave him one of the most detached characters in recent blockbuster cinema. Alex is not allowed to chew scenery, because as one of the most recognized vampires since Robert Pattinson, the man has a career the size of a planet. In his latest film, Hidden, the usual fans of Alex will be tossing their popcorn at the screen and will be running out of the cinema in screaming hysterics. Is this just a case of brilliant method?

Hidden is being filmed in Vancouver, Canada and is touted as an apocalyptic thriller about a family who has to take up shelter in a basement after an apocalyptic event. In the latest images from the set, Skarsgard is wearing dirty clothes and sports a beard from hell. His anorexic appearance offers up a post-apocalyptic Viggo Mortensen-esque gait and his stare into the camera, with his Backstreet Boys hairdo, gives his fans a completely different and raw side to him.

In the scenes, Skarsgard’s character shows the family the entrance to the bomb shelter under a piece of wood (this is also where we go when Kim Kardashian arrives in our town). His gaunt appearance serves as a haunting reminder of how bad an actor is able to look when doing proper method. Skarsgard admitted to Bullet magazine in June, “I spend seven months just playing Eric on True Blood, but when I’m on hiatus, when I get my five months off, I’m not looking to play the same character again.”

We’re excited for the film and to see Skarsgard’s transformation, even though he looks like a member of Menudo-post-Ricky Martin. Let us know in the comments below if you like Skarsgard’s new image in his latest film and what you think about Alexander Skarsgard’s new movie!