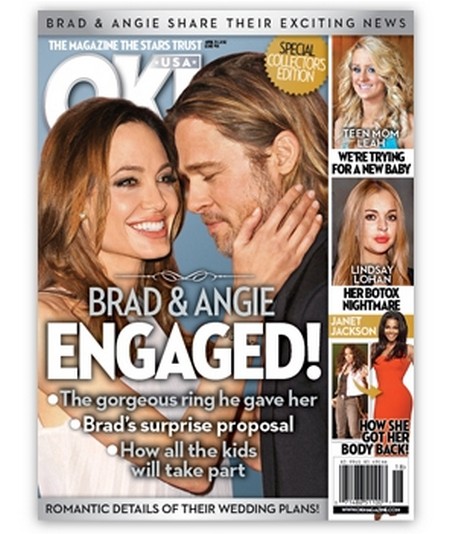 The cover story of latest edition of OK! Magazine is the amazing news of Brad Pitt and Angelina Jolie’s engagement.  No big surprise here since this is the biggest celeb story since Whitney Houston died.  What is interesting is that OK! decided to get the jump on their competitors by releasing their cover Monday instead of Wednesday, as they usually do.

Its seems that after seven years together the leading Hollywood power couple have decided to get married – gay rights notwithstanding!  At one time Brangelina swore that they would not tie the knot until all Americans could do so legally, regardless of their sex.  Oh well – that isn’t about to happen, especially in an election year, so rather than risk staying unmarried Brad and Angelina caved in.

OK! Mag reports:  Seven years and a whole mess of children after Brad left Jennifer Aniston for the pouty-lipped tattooed Oscar-winner, the World’s Most Glamorous Couple are set to finally marry.

“Yes, it’s confirmed. It is a promise for the future and their kids are very happy,” Brad’s manager Cynthia Pett-Dante told the Associated Press April 13. “There’s not date set at this time.”

That’s it. No more waiting for gay marriage to be legalized all over the world. No more coy interviews about how their brood — Maddox, 10, Pax, 8, Zahara, 7, Shiloh, 5, and Knox and Vivienne, 3, — really, really want them to do it, and maybe, just maybe, they just will someday.

The buzz started on April 11, when Angie, 36, flashed a new diamond rock at the Los Angeles County Museum of Art’s Chinese Galleries.

Two days later, a rep for Brangie’s go-to-jewelery, Robert Procop — creator of “The Style of Jolie” collection — spilled the beans. “I can confirm that yes, Robert Procop did indeed design an engagement ring for Angelina Jolie, designed in collaboration with Brad Pitt.”

The wedding will no doubt elicit a great media response – hopefully the couple have the good sense to keep the affair it strictly private!  Will Jennifer Aniston be invited and if she is will she choose to attend.  Despite lots of nonsense reported about how happy Jennifer is at seeing Angelina get what was stolen from her, namely Brad – we have heard that Jennifer is not at all pleased with engagement.

Angelina Jolie and Brad Pitt are finally engaged to be married!  Congratulations to them both.  What do you think of this great news?  Let us know in the comments below.