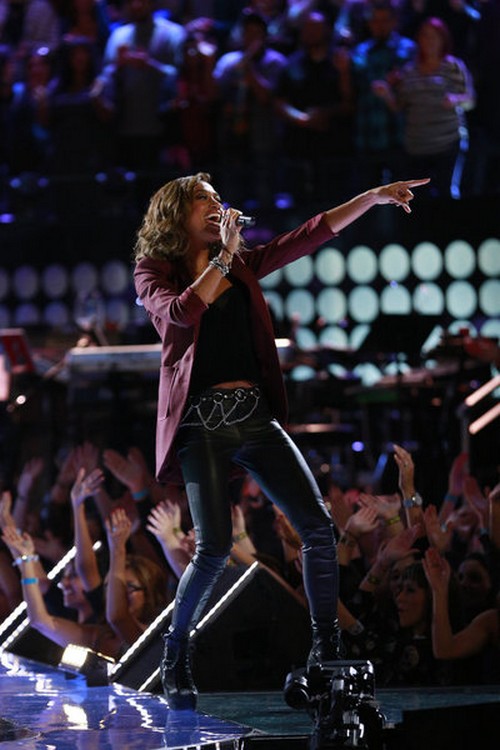 Amanda Brown  was eliminated during tonight’s  elimination episode of The Voice.  If you missed the results show and want to see who else was sent home, we recapped it here for you!

On last night’s The Voice  performance show the 6 remaining artists performed, with a trip to the quarterfinals hanging in the balance.  The final artists had two performances.  One song was selected by the semifinalist and the other by their coach.

Amanda Brown – Team Adam – Natural Woman by Aretha Franklin & Here I Go Again by Whitesnake – The impeccable Amanda Brown’s first song, Natural Woman, showed her true diva worth – and we mean diva in a good way. Amanda is one of the best performers on the current cycle of reality television talent shows. Her voice is a brilliant and beautiful gift, and her pitch perfect notes merely support her already immaculate performance package. Her second song, Here I Go Again, further defined Amanda Brown as a superstar and a reality television force to be reckoned with. She was absolutely flawless, in every single way. It is  a travesty that Amanda did not win.

Below are the judges comments for his second song: Christina “That song had CeeLo written all over it, great job”. CeeLo “Amazing performance and you look beautiful, it was fierce and passionate, all this positive energy is healing me”. Adam “This was a strange choice, but not that strange because you kick everyone’s ass, it suits you because you love this. You have so much range as a singer and I wanted everyone to see that tonight and they did”.

What do you think, did she deserve to be eliminated? Would you have liked to see her win? Let us know in the comments below.