Amber Portwood Will Die In Prison 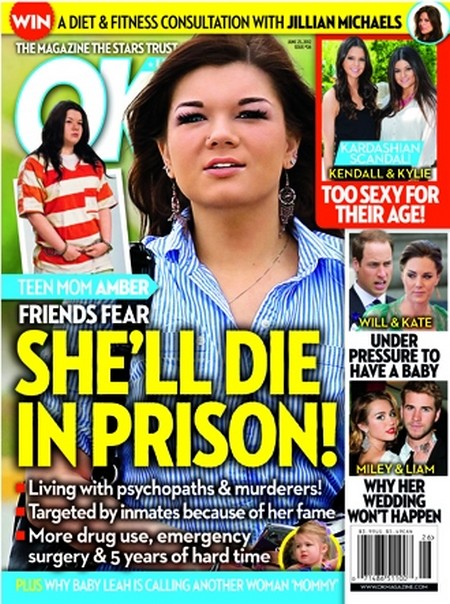 Amber Portwood will die in prison sources close to the Teen Mom fear. Amber is a self-admitted train wreck who in now locked up serving 5 years in prison. She willingly opted to serve to a five year jail sentence, thinking it’s the only way to keep herself out of trouble.

This week’s OK Magazine has a cover story with all the details on Portwood’s precarious situation.  She may think jail will keep her clean and trouble free but her friends are more worried for her now then they were before.  Perhaps she forgot about the murderers and opportunistic inmates that she will mingle with.

Friends fear that those on the inside will try to use her and take advantage of the money and fame she has.  I’m pretty sure she’ll be able to score drugs while in the slammer too, if she really wants to.  She certainly has the money to make it happen.  Worse yet is her baby Leah who has been left behind while her mom serves her time.  She is already calling another woman mommy and five years is a huge chunk of time to be absent during your child’s most formative years.

There are many more stories in this issue to catch you up on the latest gossip.  Do you think that Miley Cyrus and Liam Hemsworth will make it down the aisle?  Well OK is pretty sure it’s never gonna’ happen.  Especially since we have photos of Miley already getting hot and sexy with another man, Cheyne Thomas.

Are Kendall and Kylie Jenner acting and dressing way too sexy for their young age and is it all momager, Kris Jenner’s fault?  Queen Elizabeth is said to be insisting that Kate Middleton and Prince William produce an heir in 2013, which would make all of the royal watchers’ swoon!

Also in the latest issue you can catch up on the Miss USA pageant drama.  Miss Pennsylvania claims that it is rigged and has refused to apologize or back down despite Donald Trumps’ threats to silence and sue her.  Read more on all of these stories and more in the new issue of OK Magazine!