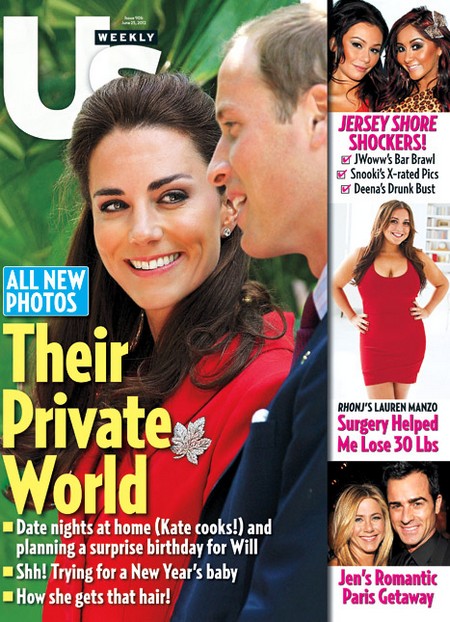 Kate Middleton and Prince William are expecting and planning for a New Year’s baby announcement! We have all been waiting to learn when Kate and William will produce an heir to the British throne and it looks as if we finally have the answer. That is the exciting news that sources are sharing with US Weekly.

This week’s issue of US Weekly has the cover story ‘Inside Kate Middleton, Prince William’s Pregnancy Plan: Inside Their Private World.’  The most significant aspect of the cover is the news that Kate and William are trying for a New Year’s baby announcement– so they better get started…  It seems Kate is going to try to conceive, with Price William’s manly assistance of course, between September 2012 and Summer 2013!

As US Weekly explains: The Duke and Duchess of Cambridge are as eager as the rest of the world to have a little prince or princess on board – but producing a royal heir requires careful orchestration!

“There’s a window in place,” a royal insider confirms.  Another source explains that Kate Middleton, 30, and Prince William, 29, hope to conceive their first child anytime between the last leg of their royal tour in September 2012 and summer 2013. (This summer, the couple will be the de-facto emcees for the Summer Olympics held in London, and will be taking a royal Asia-Pacific tour in September.)

Their ideal? A New Year’s announcement! Once Middleton hits the three-month mark in her pregnancy, “the pregnancy will be announced,” says the insider. “It won’t be hidden.”

Although the plan may sound rigid, it is the couple’s choice, the insider says. “They’re excited!””

The pregnancy plan also explains why William has not yet announced his long-term career plans with the Royal Air Force. “If they’re expecting, it will be full-time London for them,” the source says.

We also learn in this issue of US Weekly that Kate enjoys cooking at home for William when the two have some nice quiet time alone.  And for you beauty queens out there Kate also reveals how she gets that amazingly bouncy and beautiful hair.  So hurry on out there and get your personal copy of US Weekly so you can enjoy all that hot royal gossip.  It would be just great to hear our favorite royals make a New Year’s baby announcement.