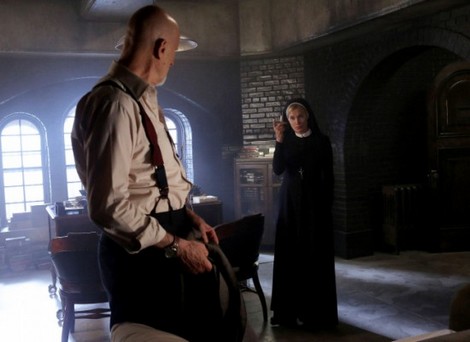 Tonight on FX AMERICAN HORROR STORY:ASYLUM airs with a whole new episode called “Nor’easter.” On tonight’s show a violent storm hits Briarcliff, allowing a group of patients to plan a daring escape. Sister Jude is haunted by her past. Did you watch last week’s premiere episode? We did and we recapped it here for you.

On last week’s show an Exorcist was summoned to Briarcliff to help save a troubled farm boy is he psychotic. Sister Jude’s darkest secret is revealed.  Dr. Thredson was appalled by the conditions at the facility, but there was not much he could do at the moment. While he disapproved of the exorcism, he was drawn into helping with it.

On tonight’s show there is a storm coming and it is set to hit on Halloween.  What a way to make a spooky night, even more spooky with a violet storm hitting Briarcliff.    A group of patient plan a daring escape and Sister Jude is haunted by her past.  I am loving season 2, I was worried they would not be able to keep the momentum after last season, but I am not disappointed yet, I cannot wait to see tonight’s episode.

Tonight’s episode is going to be another spooky episode, which you won’t want to miss. So be sure to tune in for our live coverage of FX’s American Horror Story – tonight at 10PM EST!  While you wait for our recap, hit the comments and let us know if you are excited about the season 2 episode 3 of American Horror Story?  While you wait for the recap, check out a sneak peek of tonight’s episode below!

I’m totally excited that Halloween coincides with AHS! We start out in the present with Leo and Teresa fighting off bloody face. She stabs him to death and then drags Leo up – as they start to leave, she dials 911. Opening the door, she comes face to face with smiley face! She turns to run and there’s another. They are gunned down by one of the smileys.

They smileys take off their masks and they’re just psycho teenagers! They’re upset because Teresa stabbed their bloody, but seem to enjoy their handiwork. Then they notice that Leo’s arm is missing and in a very stranger way. Hmm. Wonder if those critters are still hungry.

Back to the past, Sister Mary brings the mail to Sister Jude. Mary mentions the upcoming storm. Jude’s upset by an old newspaper that lists a missing girl – is it the kid that Jude ran over back in the day? She wants to know who brought the mail. Mary says “the mailman.” In the kitchen, angry June is taking out her stress on a batch of dough.

Dr. Thredson comes in to admonish her about corporal punishment. He wants her to back off and recommends she read BF Skinner. He tells her she needs to use kindness. She tells him she’s showing the inmates “The Sign of the Cross” movie when the impending storm hits.

He demands a copy of the autopsy for the possessed kid. They banter about natural causes and possession. Jude accuses him of leaving the old newspaper. He seems innocent enough. She tells him he has two weeks and then he’s out of the asylum.

Kit plots a new escape attempt when an orderly tells him Dr. Arden wants to see him.

Sister Mary brings the communion wine in and tells Jude she thinks someone’s drinking the wine. She demands Jude try it. Jude sees she’s wearing red lipstick and Sister Mary gets vile with her – I think the demon has possessed Mary now!

Dr. Arden shows Kit an electronic bug he says he pulled out of him in their last session. He demands to know who he’s working for and why they’re spying on him. Arden thinks it could be Jews, Stasi – any number of crazy theories. He begins torturing Kit for information he doesn’t have.

One of the inmates is praying the rosary in fear. Sister Mary comes in and she calls her Satan. The nun slaps away her rosary and forces her to her knees to pray together. Mid-prayer, the good nun stabs the poor woman in the jugular and then once more for good measure in the chest. Bloody mess.

Sister Mary takes the corpse across the grounds and dumps it. There’s something watching her dispose of the body – it’s breathing weird and has bubbly, infected looking skin. Ick.

Sister Mary comes to see Doc Arden who calls her his “little ray of sunshine.” She tells him the creatures are getting hungrier. He tells her they only have to get them through the winter and he appreciates her compassion for them.

Mary/Demon starts talking dirty to Doc and he gets angry. She hops up on a table, spreads her legs and tells him she’s “all juicy.” He slaps her. She calls him a pantywaist and he throws her out of his office.

Lana approaches Dr. Thredson and asks to speak to him in private. He tells her he’s not authorized to discuss her treatment. She tells him she knows he’s not one of them. She tells him she desperately needs to get a message to her “friend” Wendy. She says she needs to see her to straighten it out. Thredson tells her Wendy’s the reason she’s in there.

She gives him a message and he says “you’re asking me to betray Sister Jude who’s the administrator of this facility?” He seems pleased to take the note.

Shelley approaches Grace and asks her to take her along on their next escape. Grace is hesitant.

Sister Jude comes upon Dr. Arden making up a cot for the night – the bridge will be impassable in the storm. She asks him about Sister Mary – he tells her Mary’s been perverted. He tells Jude that Sister Mary spoke to him like a whore and exposed herself to him.

Jude thinks he’s the one who sent the newspaper and red lipstick to torment her and tells him she’s onto him. The phone rings – Jude answers – a little girl says “you left me there.” She tells Jude she never even bothered to get out of the car. Jude’s distraught and tells her she’s sorry. She finds a broken pair of glasses on the table – they must have belonged to the child.

Sister Jude guzzles down the bottle of communion wine. She hasn’t had a drink in decades! While the storm rages, Dr. Arden plays with the tube of red lipstick. In the common room, the crazy natives are getting restless. Drunken Sister Jude is wobbling and introducing the movie.

She introduces the 1932 classic The Sign of the Cross set in ancient Rome. She’s stammering drunkenly. The lights go out and she tells them not to be afraid of the dark. She starts talking craziness about God and dreams. She’s crying and incomprehensible. She starts babbling about the girl walking alone and being fragile.

Jude says it wasn’t wind or rain… She’s recalling the accident. Lightning flashes, she tells them to start the movie and says “I’m off to find the Mexican.” WTF?

Thredson and Lana chat during the movie. He tells her called Wendy and didn’t get her so he went to her house. He found it unlocked and abandoned. He tells her he thinks something happened to her. Thredson says Wendy’s disappearance is similar to other victims of bloody face!

The movie plays on and the audience seems not to care.

Thredson tells her he’s worried because the authorities think they’ve caught bloody face, but he fears they haven’t. She asks if Kit is bloody face and Thredson says he’s not sure.

Grace asks an orderly if she can go to the bathroom and he lets her go alone. When a sexy woman comes onscreen, Lana tells Thredson she shouldn’t be watching it because of her “condition” and she leaves to go to the ladies as well.

Jude’s wandering the dark recesses of the asylum, looking for the Mexican.

Kit, Grace and Shelley are ready to leave. Lana wants to go along and says she’ll show them the secret tunnel. There’s an orderly blocking their way – Carl – and Shelley agrees to take one for the team. She invites Carl for a quickie and he tells her the Mexican is missing. Shelley tells him she’ll help him look.

Aha! The Mexican is the patient possessed Sister Mary murdered.  Meanwhile Dr. Arden is painting nipples on statues of the blessed mother with the red lipstick. He calls her a whore and shoves the statue over, shattering it. Tonight’s episode seems to be brought to us by the word “whore.”

Shelley leaves Carl before he finishes – she knocks him down – and looks like out and runs out. She then runs head long into an alien? My second WTF of the night! She keeps on trucking and runs into Dr. Arden who calls her a (guess what?) whore. This episode could be a drinking game – when you hear “whore” take a shot!

Lana, Kit and Grace agree they can’t wait any longer for Shelley. Lana vows to expose the asylum and get everyone out. They run out into the rain and head for the road two miles away. Back in ancient Rome, a woman is being tortured – drawn and quartered maybe – I hear lions. That’s never dead.

Thredson tells the orderlies he thinks there are some patients missing. They ask Sister Mary to help and she doesn’t want to abandon the movie because the Christians are about to be eaten! She reluctantly goes along.

Shelley runs into Arden. He accuses her of f-ing everyone in the place except him. He tells her to bend over and spread her cheeks. Nice foreplay! He unzips and she sees his junk and starts laughing. He tells her to stop and she says she though he’d be hung since he’s seven feet tall. She laughs again and he clubs her in the head with something.

Back outside, the escapees’ trip over the Mexican then notice she’s been eaten! Then the zombie/creature is there and they run screaming from it.

Sister Mary wakes Jude up to tell her about the escape. She wants to know how the orderlies let it happen. She stops the film and the inmates are upset. She says there will be no other privileges because of the escapees.

Shelley wakes up strapped to Dr. Arden’s table. She asks him to let her go. She says they’ll be looking for her. He tells her they are – in the woods – because they think she ran away. She promises she won’t tell anyone about him. He tells her he had to clip her wings and that he’s an excellent surgeon. He pulls down the sheet and she can see he’s amputated her legs below the knee. She screams. Damn, poor girl doesn’t have a leg to stand on…

And that’s it for the Halloween night edition of American Horror Story – Asylum. Join us here at Celeb Dirty Laundry next week for “I am Anne Frank, Part 1” – I am so scared to even ask what that episode title means!