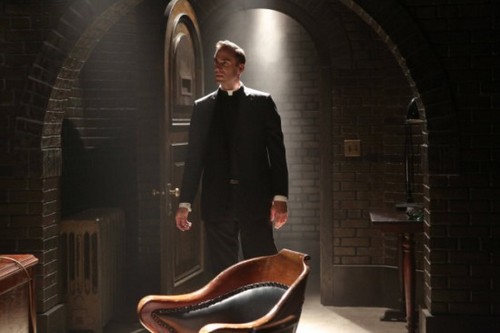 Tonight on FX AMERICAN HORROR STORY:ASYLUM airs with a whole new episode called “The Origins of Monstrosity.” On tonight’s show the Monsignor makes a Faustian pact with Dr. Arden. The origin of Bloody Face is revealed.. Did you watch last week’s premiere episode? We did and we recapped it here for you.

We learned bloody face was Dr. Thredson who is played by Zachary Quinto.  Zachary spoke to Buddy TV this week’s episode.  “This week’s show is called “The Origins of Monstrosity” and so it really dives into a lot of the roots of the characters in this world in Asylum. So yes, a lot of things will become clearer and probably even more disturbing in the next couple of weeks.”

On tonight’s show a mysterious little girl is abandoned at Briarcliff. The Monsignor makes a Faustian pact with Dr. Arden. The origin of Bloody Face is revealed.

Tonight’s episode is going to be another spooky episode, which you won’t want to miss. So be sure to tune in for our live coverage of FX’s American Horror Story – tonight at 10PM EST! While you wait for our recap, hit the comments and let us know if you are excited about the season 2 episode 5 of American Horror Story? While you wait for the recap, check out a sneak peek of tonight’s episode below!

Tonight’s recap:  On the day before Thanksgiving, I’m thankful I’m not eating while watching this episode… Especially since I think Bloody Face may be serving up something frightening and gory! Thredson/Bloody Face calls 911 and sends the cops to a house of horrors – he’s got bodies and parts slung up like a macabre mobile from hell! Yummy.

A Mom brings in a little girl to the asylum. Jude doesn’t want to take her because they don’t have a kids ward. Seems little Jenny might be a killer who keeps trophies. Mom says her daughter has never seemed like a child. Jude tells her to pray because as much as she would like a children’s ward at Briarcliff, she doesn’t have one. Mom insists Jude meet her and wants to know if Jenny could have been born evil.

Lana wakes up to the sounds and smells of cooking. Bloody Face is cooking. Lana screams and Thredson screams back and tells her no one can hear her anyway. She wants to know where Wendy is – he tells her she’ll never be found. He shares his cooking tip – nutmeg – but I’m guessing he adds a little human flesh.

He tells her he never knew his Mom – that she had abandoned him. Thredson admits he grew up in the system, but reveals he was beaten with a crop and given no affection. Lana eats the fancy grilled cheese. She tells him she’s not patronizing him – that she appreciates the act of kindness. She tells him she felt abandoned at Briarcliff, so she understands.

He tells Lana he was right about her – that she’s the one! He cries tears of joy. He says he knew he was different, smart – but afflicted – and that led him to the study of psychiatry to understand his issues. In med school, he saw a female corpse and identified it with his mother at the age she abandoned him. He said he knew it wasn’t, but it felt like it was.

Flashback – he knocks out a woman and brings her to the lab. He removes her skin while she was still alive. Lana cries out, but he tells her it’s okay, that since she’s there, all of that work is behind him. He calls her “Mommy” and caresses her face.

Sister Jude gets a call from the Nazi hunter. He says he’s been working on her case. He says Arden was Grupper and was a doctor at Auschwitz. He says he got Red Cross documents to change his name and come to America. He says he needs Arden’s fingerprint to confirm, but warns her to be careful, that he’s dangerous.

She turns, startled to find Jenny. Jude wants to know where her Mom is and Jenny tells her that her Mom kissed her good-bye and left. The Monsignor is called to the hospital to perform last rites for a patient who’s apparently not doing well and is a gruesome sight. He puts on his raiment to do the last rites and then recognizes her and calls her by name – it’s legless Shelley – and most of the skin on her face is gone and she’s wheezing bloodily. Ick.

Arden is overseeing a TB ward at Briarcliff. The Monsignor gives her last rites and they pack her up. Arden tells him they have a crematorium to take care of all of the bodies and he reveals he’s been working on an immune booster that would prevent all disease. Monsignor wants to know what he needs and he says he needs patients for human trials.

Back at Shelley’s bedside, Monsignor chokes her to death with his rosary – a mercy killing if ever I saw one. Monsignor comes to confront Arden about what he did for Shelley – he accuses him of mutilating her. Arden tells him Briarcliff is full of human waste – people that are evolutionary failures.

Arden brings Monsignor in to show him the next stage in human evolution. He’s got a patient on the gurney that’s misshapen and horrible looking – I think it’s Spivey. Monsignor says Arden should be locked away and he says if he goes down, the priest is going down with him. The good Father predictably backs down.

Sister Mary and evil little Jenny are hanging in the kitchen. Sister wants to know why her Mom ditched her and Jenny said she thinks she’s evil. Mary tells her she knows she killed her friend, but her friend deserved it. She encourages Jenny to hang on to her special gifts. She tells Jenny she’s the devil, but the little girl doesn’t believe it.

Flashback – Sister Mary is tricked into getting naked in front of all her teen friends in a terrible prank. Mary tells her she thought she’d be safe in God’s house, but tells her there’s no God. She tells her she’s tired of that bitch Jude, drinking and wearing her cheap red underwear. Jenny fusses that she’s going to be locked away forever. Mary tells her to quit whining and learn how to defend herself.

Jude comes to see Monsignor about Jenny. He’s distraught and she wants to know what’s wrong. He tells her Briarcliff is too much of a burden for her. He tells her he’s contacted a friend in Pittsburgh who’s opening a home for wayward girls and he’s booked her a flight to go there and help run it. Jude says she knows it’s Arden that wants her out. He denies it and storms out.

Jude is crying as she packs when Sister Mary comes in to tell her Jenny’s Mom came back to pick her up. Mary wants to know what Jude is doing and she tells her she’s leaving – that she’s been sent to Pittsburgh. Mary says she doesn’t know what she’ll do without her. Mary gives her a hug and tries to steal a piece of her red lingerie.

Kit calls Thredson from jail begging for help. He tells him the cops are saying they have a tape of him confessing to the murders. Thredson tells him he needs to take responsibility. Meanwhile Lana’s trying to saw her way out of her restraints. Kit calls him a liar and Bloody Face freaks out and slams the phone down. Lana hustles back to bed before Thredson comes back in.

Thredson’s ranting about Kit and she asks if he talked to him. He recognizes she’s sweating and her heart rate is up and wants to know what she was doing. He throws back the blanket and sees the partially broken chain. He tells her she’s like the others and wants to abandon him. She tells him she’s not like the others. He says sometimes it’s just better to end it. He puts on a gross skin mask and tells her it’s her fault – she’s brought it on herself as he comes to her.

Sister Mary is singing and dancing around in Jude’s sexy red slip. The phone rings. The Nazi hunter calls and Mary pretends to be Jude.

Arden’s in his lab and Jude brings in the cognac and glasses to toast his victory over her. She says she takes pride in her good sportsmanship. He says he wouldn’t drink alone and she pours herself a glass as well. They clink glasses and he waits to see her drink before he downs his. She wasn’t trying to poison him – she was after the fingerprint!

There’s a knock on the Nazi hunter’s door and it’s not Jude, but Mary. He asks if Jude sent her and she says she doesn’t know she’s there.

Jude finally makes it to the hotel to see Nazi hunting Goodman. His phone is ringing and the room’s cleaned out. Jude answers the phone and gets a hang up. She hears a thump and it’s the Nazi hunter writhing in the throes of death. He whispers as he dies “a nun – one of yours.”

Mary has brought Arden’s Grupper file to him. She calls him Hans and he grows outraged. He asks if this is all of it and she says that she’s hidden some away to protect herself. Arden says he’s not a monster, he’s a visionary. He tells her he’s on a lonely path and has to work in secret. She tells him she supports him. He wants to know why she’s protecting him.

Arden tells her he knows she doesn’t love him – he’s too old and ugly. Mary tells him he just needs to trust her with his entire soul and everything will work out. She kisses him. I think he may have just made a deal with the devil.

Meanwhile little Jenny has killed her mom, dad and brother. She recites the same story she used when she killed her friend.

Back at Thredson’s, he’s got a scalpel and tells her not to scream. He tells her after the first few cuts, shock will set in and she won’t feel anything. She tells him it doesn’t have to be this way. He reveals he’d seen her before she was at Briarcliff.

Flashback – Lana’s a reporter working the crime beat. She’s covering a murderer and seems to have a unique perspective on him.

She tells him she understands him and he disagrees. She tells him she doesn’t want him to feel guilty – that a mother’s love is unconditional and he deserves that. She calls him baby and he pulls off the skin face mask. She calls him “my baby” and he cries. He says baby needs colostrum and starts trying to nurse. She lays her head back and cries.

At the body dump, they’re lowering bodies down that were strung up. Oh wait – the body dump was in the present, not the past. You couldn’t tell until a cell phone rang. Looks like they’re at modern day Briarcliff! They ID Leo’s body but realize wife Teresa is missing. She’s on a table with a masked lunatic looming over her!