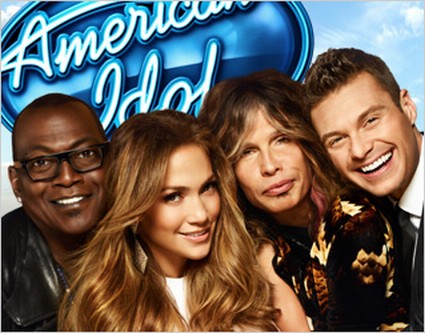 Last night on American Idol was the end of Hollywood Week and the judges have narrowed down the competition to 70 hopeful American Idols.  If you missed last week’s show you can read our official recap here!  The contestants are now on to Las Vegas for the next round in the competition where they will once again be subjected to another group performance and another final audition.

They will take the stage in Cirque du Soleil’s Viva Elvis Theatre at Aria Resort & Casino.  This time,  the selections will be songs of the 50s and early 60s.

After tonight’s show we will be left with 48 competitors.  Next week, that group will each perform “One Song/One Instrument”.  After,  the judges will make their picks and the Top 24 will be revealed!

Meanwhile American Idol continued to dominate Wednesday night’s ratings, even though its numbers remained significantly lower than they were a year ago.  The first hour of the Fox talent show attracted 18.9 million viewers, while the second drew 19.4 million.

We will be live blogging American Idol – Las Vegas Round with all the up-to-the-minute details at 8 PM EST so make sure to come back to this spot and watch the show with us. Refresh often to get the latest updates!!

TONIGHT’S RECAP: Before leaving Hollywood, the contestants are told that they have to team up in groups of three or four.

The first group up is Skylar, Cari, Colton and Chase singing “Dedicated To The One I Love”. I thought they were all really good, but the judges didn’t like Cari and they send her home.

Up next is Gabbi, David Leathers Jr., Jeremy and Ariel, they do a rendition of “Rockin’ Robin” and they were amazing, the judges agree and send them to the next round.

Next is Angie, Adam, Erika and Shelby who perform “Great Balls Of Fire”. They all make it through to the next round and were just awesome.

Idol shows us some of the hopefuls who didn’t make it through; Wayne Wilson, Ashley Robles, Stephanie Ranue, Aubrey Deckmire, Janelle Arthur and Tina Torres.

Haley, Reed, Elise and Eben are up and the judges think they are over the top, spot on. They all make it through to the next round. I don’t know what Reed was doing with his hips, but I found it a little creepy.

Jermaine and Cowboy are up, they are a duet and Heejun is thrilled that Cowboy is no longer in his group. There seems to be a lack of communication between the two, will they find a common ground? They sing “Breaking Up Is So Very Hard To Do”.  Randy calls them “The Brothers Righteous”. The judges all loved the duet, they both make it through.

Some more girls that made it through to the next round are; Hallie Day, Ballie Browm and Chelsea Sorrell.

Up next is a group consisting of Jessica Sanchez, Deandre Brackensick and Candice Glover singing  “It Doesn’t Matter Anymore” .  Best song of the evening!

Day one contestants are going to be pitted against winners of day two.

Curtis, Clayton, Scott and Adam perform their rendition of “Jailhouse Rock”. The performance was fun but Scott lost a little tempo and Curtis was sharp. Mixed reviews, Scott, Clayton, Adam are threw and Curtis is at the end of the line, he didn’t make it.
Caleb and Joshua’s group make it through to the next round. Joshua, Curtis Finch were amazing, background singers Shannon and Amber were ok, Shannon and Joshua made it through.

Lauren, Wendy and Mathanee singing “Will You Still Love Me Tomorrow”. The girls make it through, Mathanee is going home.

Heejun, Neco, Jairon and Phil singing “I Only Have Eyes For You”. Heejun, Jairon, Nico and Phil are all going through and vocal coach Peggy is very proud. Heejun is beside himself, filled with emotion.
Creighton, Aaron, Nick and Jen singing “Sealed With A Kiss”. The judges all clap, they love it all except for Nick. Aaron, Creighton, Jen all step forward and make it through. Nick is at the end of the line, he is going home.

The performances are over, but the drama has just begun and more cuts are going to be made. All remaining contestants are back on stage. After watching all the groups, they have to get to the top 40.

42 contestants have made it through, for now. Next week it is one final performance with everything to lose. Will your favourite make the top 24? All will be revealed next week.