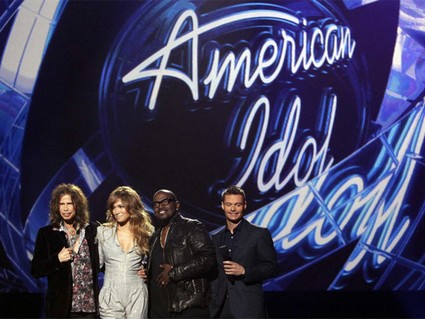 Finally American Idol 2012 is back tonight on FOX with a two-hour episode.  We will be live blogging the episode with all the performances and idol hopefuls.  Tonight there will be brand new contestants, a superstar judging panel and the best and worst of auditions.  Returning to the judges desk this season are Randy Jackson, Steven Tyler and Jennifer Lopez.  Ryan Seacrest is back to host the show.  According to producers we can expect no changes to the format this season.

The show was taped months ago – if you want to find out who makes it to Hollywood week check out Celeb Squabbler who has already got their hands on a leaked list of contestants and you can check the list out here! (Warning it is a spoiler list)

This season promises to deliver the most talented group of singers yet and as always, it’s up to the viewers to root and vote for their favorite contestants, ultimately crowning the next American Idol.

Will YOU be watching the show tonight? We sure will!  We’ll be counting how many creepy looks Steven gives the contestants while he flirts with them constantly. Charming or creepy? What do you think?

Stay tuned we will be covering the show with all the up-to-the-minute details tonight at 8PM EST, so don’t forget to stop by  and refresh often to get the newest updates.

Tonight’s show: Randy, Steven and Jennifer are here to find America’s undiscovered talent.  It is the first time idol is in Savannah, Georgia!

First up – David Leathers Jr. – a self professed lady’s girl 17 from North Carolina – his nickname – Mr. Steal Girl – he sang Remember the Rain – by Century 21.  He was in a singing competition in 2009 with last year’s American Idol winner Scotty McCreery and won.  Steven thought he was awesome.  The judges asked him to sing Michael Jackson and he sang ‘Never Can say Goodbye.’    Randy wanted to make it really easy and all judges decided YES he would go to Hollywood at once.  He is certainly someone to watch!

Gabrielle Carrubba – a 16 year old from Connecticut she is not only a singer she is a champion tap dancer  Gabi sang Sunday Morning by Maroon 5.  The judges loved her they said she was wonderful beautiful, very nice tone, she nailed it.  YES

Jessica Whitely – 19 years old from Ohio  In this Song by Charice – she is bad – just awful.  Randy tells her it is not her vibe.  She is a NO. She tells them she will see them in Texas so she is going to audition again.  The judges want to tell her not to go to Texas and waste her time and money because the answer will still be NO.

Shaun Kraisman – 26 years old singing Oh Girl by the Chi-Lites  he looked like Ryan Seacrest and sounded like him when he spoke.  He is better at sounding like Ryan than singing and it is a NO.

Shannon MacGrane – 15 years old from Tampa, Florida she is a volleyball player – she sang Somethings Got A Hold of Me by Etta James.   They are impressed because they called all her family and friends in and it did not bother her,  she has nerves of steal.  She sound fantastic and they all vote YES to send her to Hollywood.

They have a lot of bad singer – who actually think they can sing.

Amy Brumfield –  24  from Gatlinburgh, Tennessee – Amy lives in a tent in the woods, she is struggling financially and cannot afford a hotel.  She sings Super Women by Alicia Keys.  The judges like her tone.  They tell her she is a hipsy and they vote YES out of a tent and into Hollywood.  She gets the golden ticket!

Joshua Camden – 23 from Canton, South Carolina – he says he has been compared to Chis Daughtry and Brad Paisley.  His style is country/pop/rock.  He sings  I’m yours by Jason Mraz – he was terrible and they wish him luck but it is a NO.  He has a little hissy fit outside.

Stephanie Renae –  just turned 15 and is from Orange Park, Florida she sings ‘Inside your heaven’ by Carrie Underwood.  Randy votes NO, Jennifer says YES, Steven says YES. She is going to Hollywood.

Schyler Dixon – 16 from Tennessee – she audition last year with her brother and she did not make it.  Her brother was not auditioning this year but the judges insisted she go outside and get him.  Colton Dixon -19   –  the judges said they both grew and unanimously they want to see both of them in Hollywood!  The judges are stoked to see themselves proved wrong – not taking them last season.

Lauren Mink – 25 from Kentucky, she is the director of a program for Adults with Disabilities.  She sings Country Strong – Steve loved her she gave Jennifer goose bumps.  Steve tells her she has so much passion behind the notes.  YES she is going to Hollywood.

Moweuna, 25, from Africa who thinks he is a country singer – he is confident but that is not going to take him anywhere – he cannot sing and it is a NO to Hollywood.

Ashlee Altise – 28 – a sales associate – she has invented a dance called the joyhop and too my surprise she is good and she is going to Hollywood YES!

WT Thomas – 25  from Virginia and he works for a the federal prison system and he was fired when he came to the auditions.  Steven is not sure he is ready and says no.  Jennifer takes a chance on him and says yes.  Randy tells him he is going to get eaten alive but agree to let him go.  So he is going to Hollywood.

Erica Nowak – 28 a bartender who says she is Steven Tyler’s ex-husband.  She got a hug from Steven and grabbed his butt.  She did not get the Golden Ticket but she did not care because she got to hug Steven.

Brittany Kerr – 28 – Randy thinks she is adorable.  Steven think she is pretty.  Randy says Yes, Jennifer says No and Steve says YES – hmm no surprise pretty, blond and when she raised her hands about her head her top popped and they saw her mid-drift. No brainer a YES!

Philip Philips – 20 from Georgia – he is a great singer – he sings Superstition.  They have him play the guitar after he sings Thriller by Michael Jackson.  Jennifer tells him he is super special, Randy thinks he is a true artist.  He is going to Hollywood it is a YES!

42 singers got the gold ticket to Hollywood and it is a wrap for the night.  Tomorrow we will be covering the show again so make sure to come back and watch the show with us.   The judges head to Pittsburgh!