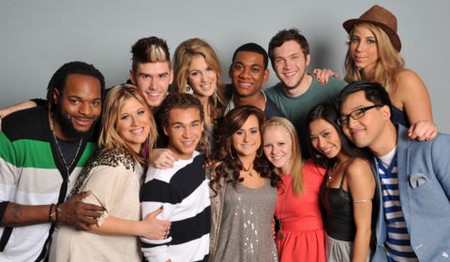 American Idol 2012 is back tonight and we have our top 12.  Stand by as we live blog the show with all the up-to-the-minute details.  On last week’s show we said goodbye to the first of the Top 13.  The contestants in the bottom two last week were Jeremy Rosado and Elise Testone.   Elise Testone was given another chance and  Jeremy Rosado was sent home.  If you missed the result show you can read our full recap here!

This week American Idol welcomes a new addition to the cast: fashion designer Tommy Hilfiger! Hilfiger will meet with the remaining 12 contestants and serve as their “image adviser,” helping them choose clothes and accessories.

On the results show tomorrow night Chris Daughtry will return to Idol to perform ‘Outta My Head’, the third single to be taken from the band’s third album Break The Spell.

On tonight’s show the Top 12 are scheduled to sing songs from the year they were born.  We are not sure tonight if it will be the Top 12 or the Top 11.  It was leaked that on American Idol tonight one contestants will be thrown off the show.  The contestant is said to be Jermaine Jones and he will eliminated for concealing arrest warrants from the producers. He  was charged with 2 crimes in 2011 and one involved violence!!

We will be live blogging tonight’s episode with all the up-to-the-minute details. So come back at 9PM EST and spend the evening with us. Make sure to refresh often to get the latest updates! While you wait for the recap, you can check out the sneak peek video of tonight’s episode below!

RECAP: The last 24 hours in Idol world has been nuts with the elimination of Jermaine Jones for not airing his dirty laundry about his criminal record. No idea on how Idol will handle his leaving, we’ll just have to wait for Ryan to announce it since he only gave us a tease at the beginning of the show. After some silly baby pictures of the judges and one of Ryan’s sister, oh sorry, it was actually Ryan – we move on the the first performance of the night with the hopefuls singing songs from “The Year They Were Born”.

Phillip Phillips sings “Hard to Handle” by the Black Crowes.

Phillips parents come on and tell a story of how he nearly died as an infant. Also, he was very sick last week with kidney stones and just before surgery he went in to rehearse. Tonight was the first time he performed without his guitar and I liked it.

Randy said, “You’re kinda unique for us this year.” Jennifer said, “This is just so natural for you.” J-Lo said, says “it just comes out of you.” Steven really didn’t say much.

Jessica Sanchez sings “Turn the Beat Around” by Gloria Estefan.

Jessica’s was absolutely adorable when she was little, tonight she tries something different that comes off cheesy.

Steven said, “I love your voice, but you can’t stray too far from what I think you do best, which is ballads.” Jennifer said, ” the rhythm got you, but it was still a good job”. Randy said, “liked the song choice but didn’t like the vibrato”.

Heejun is lucky he is cute and funny, because if his singing keeps on this way – he’s going home soon.

Randy said, “I didn’t really enjoy this at all, it was pitchy in five or six spots”. Jennifer said, “you fought through your struggles and towards the end it was beautiful”. Steven said, ” I didn’t like the song, but you still have special voice”.

Elise’s naturally raw and raspy voice did a good job with this song, she said people were going to be “making babies” when they hear her sing.

Steven said, “I love your voice”. Jennifer said, “that was right on every single level, a beautiful, beautiful thing”. Randy said, “America, Elise is back, just like butter”.

Jimmy Iovine and Will.i.Am made this dreadful song choice for DeAndre. It was painful and he didn’t know where to go with it.

Jennifer said, “you can sing anything, you sang that beautifully but I think Jimmy and Will steered you wrong with the wrong song”. Steven said, “I didn’t think it was the right song either, but I love your voice”. Randy said, “it was boring, you need excitement, Jimmy and Will were wrong with that”.

After the damage she did with Whitney Houston’s song last week, I was surprised that she choose a Maraiah Carey song.

Jennifer said, “that was not an easy undertaking but you did a beautiful job with that”. Steven said, “I think you do your best when you don’t try hard”. Randy said, “you are hear because you have mad potential and you are fearless”.

I’ve never heard this song before and I don’t believe I like it.

Jennifer said, “I loved the beginning of that, Colton is a lover”. Steven said, “I think it was the wrong song for your voice and your passion, I didn’t feel it go anywhere”. Randy said, “there are always two ways to go with this, the song didn’t matter, I paid attention to you and I could care less what the song is because you are always consistent”.

I’m not really crazy about her rendition, that big break that Jimmy added in the song was not as dramatic as in the rehearsal.

Steven said, “I think you were too busy all over it, I still like your voice”. Jennifer said, “you have vocals like Janice Joplin but the arrangement left us with wanting more, I love seeing your image shape and form in front of us, I feel you”. Randy said, “I kind of liked it, for me it was an 8 out of 10, be careful to not try and make too much out of a classic song”.

BREAKING NEWS: Ryan is now ready to tell us that Jermaine Jones was eliminated, which TMZ was already the first to report yesterday. They go to footage with Nigel and Ken cornering Jermaine in the back room about his criminal record. They list his crimes and give him a good lecture. Jermaine claims that he was scared and nervous with thought that he would be penalized for his past. Nigel advised Jermaine what already knew, they have no choice but to let him go, it’s the end of the road.

Skylar Lane singing “Love Sneaking Up On You” by Bonnie Raitt.

She was ok, but I really don’t like her. I find she is way overrated, this song is all about the character and experience and Skylar doesn’t have that.

Steven said, “you got so much heart and sole in you”. Jennifer said, “I got to keep it real, you really killed that, you still did your thing”. Randy said, “I loved the song you sang and you did it really, really good. You did it well and rocked it”.

Joshua Ledet singing “When A Man Loves A Woman” by Michael Bolton.

Ryan brought out a giant bucket of crawfish and had Josh teacesh America how to eat crawfish, in a white suit. There is really promise with this guy, it’s a good song choice, he delivers and gets the first standing ovation of the night.

Steven said,  “that was so good, we got no words. You did so big that God came through your eyes”. Randy said, “that was phenomenal, incredible on every level. The crawfish did it that Ryan and I brought back from Louisiana.” Jennifer said, “the best we have ever seen on Idol”.

She is really sweet, but I didn’t think she had the chops to belt this one out. She missed some notes throughout and her voice cracked on the big final note, the judges ignored it.

Best performance of the night for me was Joshua Ledet and the worse I believe in trouble are DeAndre Brackensick and Skylar Lane.

The judges agree Joshua Ledet was the best and safest, but the worse and in trouble, they Randy thinks is Heejun.

Wow, what did you think about the show? Sound off your comments below, we would love to know who your favorite is and who do you think should go home?

Tomorrow night is the results show, don’t forget to come back when we will be blogging the results live.