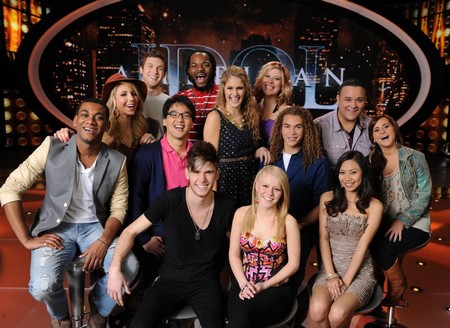 Did you watch the top 13 perform tonight? If you missed any of the episode, you can catch it all HERE in our full official recap.

I loved tonight’s show there were some amazing performances and some not so great performances. Did you like what Idol choose for the contestants to sing, Stevie Wonder and Whitney Houston? I’m a little tired of Stevie Wonder, time to sing someone else’s songs.

Joshua Ledet was the first one to sing tonight and he came on strong, did you like his rendition of “I Wish”? Just when things were heating up, Elise Testone comes on stage and bombed. The judges clearly didn’t like the way she sang, did you? Although, I believe she is a good singer, but singing Whitney Houston’s songs takes an amazing singer to do it justice.

Jermaine Jones sang next, I know the judges love that deep bluesy voice that he has, but it just doesn’t do it for me, how about you? Do you think he can really be an American Idol? Erika Van Pelt tried her best at “I Believe In You And Me” and what I didn’t like is that she tried to imitate Houston, did you notice that? I thought the judges were too nice to her tonight.

Colton Dixon was challenged with a Stevie Wonder song, but I loved what he did with it and the judges did as well. Shannon Magrane was next and although I like her, the judges didn’t. What was your opinion, did you like her, or did you think her nerves got the best of her?

Deandre Brackensick could sing anything and I still wouldn’t like him, I just don’t think he is that good. What do you think, should he have been give a spot in the top 13? Skylar Lane started off slow and brought it home towards the end, I liked what she did with “Where Do Broken Hearts Go”. Did you think she did good with this song, you know, considering that she is a country girl?

Heejun Han was one of my favorites, but until tonight I didn’t realize that it was his personality that I loved, not his singing. What did you think about his rendition of “All Is Fair In Love”?

Well, that was nine contestants and the judges started getting tired, well two of them at least, Randy stepped it up again and I was really thankful. The last thing we need is three judges like Paula Abdul with her “Rainbows & Unicorns” attitude when it comes to commenting on the contestants’ performances.

Hollie Cavanagh was up next and I thought she was good, although I didn’t think she “nailed it” like the judges thought. What did you think, did you like how she sang, do you think she is a top contender?

Up next was Jeremey Rosado, I just can’t understand why the judges brought him back, do you? This guy is just not the “whole package” and his singing is mediocre at best. What are your thoughts, did you like his rendition of “Ribbon In The Sky”. I was happy that at least Randy told the truth saying,“this wasn’t your best song for me, you should have put more swag in it”.

Hands down, no question, 100% the best performance of the night goes to Jessica Sanchez, she sang Whitney’s most iconic song, “I Will Always Love You”. The judges were floored, as well as the audience who gave her a resounding standing ovation. What did you think, did you love her performance as much as everyone else. If you missed it, check out the video below that I am voting as “Best Performance” of the night.


The last performance tonight was Phillip Phillips and he took “Superstition” to a whole new level. I love how he takes a song and makes it his own without butchering it, don’t you?

Thirteen contestants, I have my favorites, do you? I am voting for Jessica Sanchez to make it to the final two. Anybody that can belt out Whitney Houston’s most iconic song like she did deserves her place in the finals.

Who impressed you the most with their Whitney Houston or Stevie Wonder performance tonight? Tell us who deserves to get your vote in our “Idol” poll.