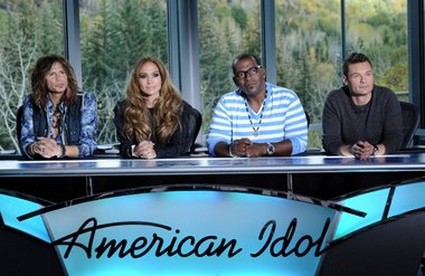 American Idol season 11  auditions finish  tonight at the Gateway to The West St. Louis, Missouri.  The next stop is Hollywood Week!   I have to say I am ready for Hollywood week – the auditions just have not been doing it for me, too scripted.  Have you enjoyed the auditions? Sound out in the comments below and let us know.  Lets hope things pick up tonight.

The show drew 18.19 million viewers last night.  That was more than all of the other broadcast networks drew combined , but it was still way off previous seasons’ numbers.   Among adults 18-49 ratings were down 9 percent from last Wednesday and down a whopping 34 percent from the comparable week a year ago.  I am not surprised the auditions have been lackluster.  Perhaps once they hit Hollywood Week they will pick up.

On last night’s American Idol the Portland, Oregon auditions while disappointing, still featured a number of memorable performances.  If you missed the show you can read our recap here!  If you want to see all the performances the videos are here!

We will be live blogging the show with all the up-to-the-minute details at 8 PM EST so make sure to come back to this spot and watch the show with us. Refresh often to get the latest updates!! In the meantime check out the video below!

RECAP: It’s the final auditions before Hollywood week. The show takes us on a look back at Carrie Underwood, saying goodbye to her animals and heading to St. Louis to try out for American Idol. Now, a new crop of talent from St. Louis will be trying out.

The crowd of 10,000 has showed up for a chance at a lifetime. The first contestant, Johnny Keyser from Papano Beach, California singing Change Is Going To Come by Sam Cooke. Every time he tries to stop singing, the judges tell him to continue and JLo tells him he is going to be a star. The judges loved him, he’s going to Hollywood.

Over the past 11 years, Idol has come across every kind of singer, some auditions are best seen and not heard and Idol gives a look at one of the worst from St. Louis, without the sound.

Next up is Rachelle Lamb, she is doing Idol for her daughter; she is going through a divorce and her ex held her back from singing. Rachelle brings her daughter, Madison, into the audition room with her. She chooses to sing Find Somebody New by Faith Hill. Steven liked her moxie and both Jlo and Randy were really impressed, she gets a ticket to Hollywood.

Oliver McCrary says his singing is his wife and after one of the worst auditions, Randy tells him that if that is his wife, he is going to be divorced. Steven Tyler gives us one of his charming rhymes, that basically says WTF??

Reis Kloeckener from St. Louis, he was bullied in high school, kids thought they could take advantage of him. Once he joined choir, he gained a lot of confidence. He is singing Lean On Me. Steven loved it, he said it put a tear in his eye. JLo gives him a quick yes, followed by Randy.

Steven heads back stage and gives the next round of contestants a little pep talk.

Ethan Jones, 22 years old, dropped out of school to be a full time musician with his family. His father helped found one of the biggest bands in St. Louis, but he had to go to drug and alcohol rehabilitation. He sings I’ll Be by Edwin Cain. Randy said he looks nothing like the way he looks, Steven was happy he didn’t choose a country song, JLo love it – he goes through to Hollywood and Steven wants to meet his father when he gets out.

Mark Ingram, the Hotel Monitor where the auditions are being held and the staff comes in with him because they think he is a great singer. He is singing Overjoy by Stevie Wonder. The hotel staff loved it, but Steven found he was lacking in keeping his tune. JLo thought his nerves got the best of him. Randy joins the other two judges and gives him a no, he’s not going to Hollywood.

Lauren Gray, 22 years old, her family owns a wedding shop and she sings with her dad in a southern rock band. She is singing One And Only by Adele. All three judges are clearly impressed and JLo has tears in her eyes and tells Lauren that she is the greatest female vocalist so far.

Forty six hopefuls are heading to Hollywood from St. Louis.