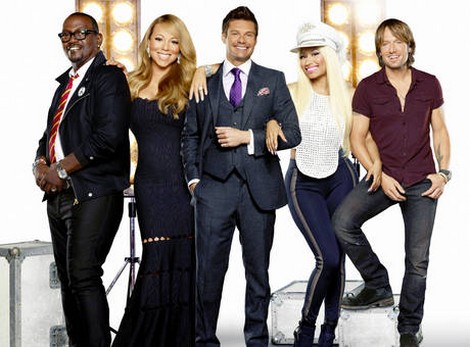 The new season of that other reality television talent juggernaut, American Idol, is around the corner. The show has been revamped to fit a new generation – the first season aired a decade ago – with a new judging panel, a fresh look, and more realistic promotional material. In the first official Idol promo, the show is hyped by Randy Jackson, who heralds in the new-gen show by doing a quick back-peddle of Idol history.

He says in his BMW advertisement voice, “American Idol is now the gold standard in singing competitions.” The names of the previous Idol stars pop on the screen in order to let the viewer know that this is it – this is Idol. A short montage of successful Idol alum shows Carrie Underwood singing, Jennifer Hudson waving, and Daughtry rocking. The montage stops when the success of Phillip Phillips – the recent winner – is expanded upon. The blue Idol titles roll on screen and document Phillips’ multi-million selling accomplishments, while Randy says, “This show… has truly permeated the whole world.” The screen fades to black and shows a finale stage covered in billions of streamers, with the title, “Others dream. Idol delivers.” Then, in a final cold-chill moment, the premiere date explodes on the screen in an iPad-app type graphic.

It’s interesting to note that Idol’s new tagline – “Others dream. Idol delivers.” – is actually a stab in the gold encrusted heart of other reality television competitions. The other reality shows – X-Factor, The Voice, etc. – might deliver in viewership numbers and overall production, but Idol delivers the stars. The show has been stalling in recent years, but Phillip Phillips’ success is testament to the fact that Idol is the only reality talent show in the world that makes those endless promises of fame and fortune really come true.

One cannot say the same about The Voice or even X-Factor USA, where the eventual winners of the competition fade deeply into the recesses of obscurity and memory. Whilst Idol has had more misses than hits – only five of the eleven winners have achieved considerable international fame – the show is still the go-to word for any aspiring singer. Even if one takes into account that Idol has been around much longer than any other US singing competition – giving the show more opportunities to deliver stars – Idol is still the number one music program in the world, and it easily eclipses the campiness of The Voice and the stylized production of X-Factor.

American Idol is not just “another” reality show; it’s the mother of all reality shows, the great grandfather of fame, fortune, and international success, and the muse behind the music industry landscape. On Wednesday, the 16th of January, 2012, new judges Nicki Minaj, Mariah Carey, and Keith Urban will, for the first time, start their journey to find the biggest music star on the planet – where will you be when this moment arrives?