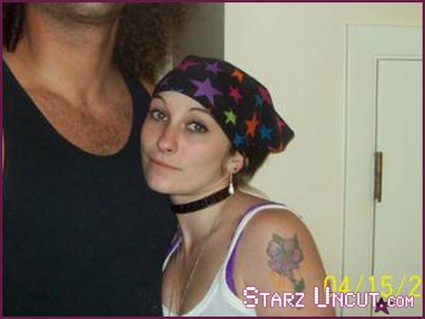 American Idol contestant Amy Brumfield shocked us all by revealing that her and her boyfriend were living in the woods, last night on the premiere of American Idol season 11.

Well Amy has been blabbing and she has let her friends know that she was eliminated from idol.  How did she do this you ask, well she posted it on her Facebook account.

Our friends over at Starz Uncut has provided us with the following and the pics.  Amy Brumfield leaked on her Facebook page that she gets eliminated from the show American Idol on group day, claiming she doesn’t work well with other…

“OH MAN, it Feel sooo good to be home!! i never thought i would say this but i missed Tennessee…. WHAT!?!?!?!” She continued, “you guys should know i don’t work well with others… group day i got eliminated”

Last night Amy Brumfield preformed Superwoman by Alicia Keys on American Idol. She straight blew the judges away getting her ticket to Hollywood. 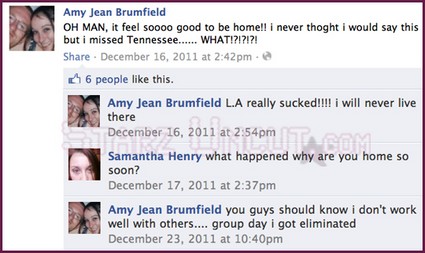 Today it was  revealed by TMZ that Amy has a long, long criminal record, revealing the serious struggles she’s had with alcohol. So far to date, she has been arrested 6 times in the past 7 years. One of these times was on August 22, 2010 after publicly urinating on herself in the lobby of a Baskin Robbins. Shortly before that, police officers arrested her for being intoxicated in front of a Tennessee restaurant. Tack on some underage drinking arrests, and an arrest for staying at a property after her lease had ended – well, there you have it.

I am not to sure how A.I is going to handle this, a contestant leaking her elimination can’t be good for the show.  We are live blogging the show tonight with all the details, stop by and see our recap!  Let us known in the comments below what you think of Amy leaking the info??