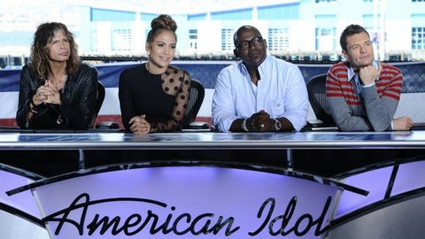 Did you watch American Idol last night?  We did, and we recapped it for you here!  How did the ratings hold up for the show, well  overall, 21.6 million people checked out the season 11 premiere Wednesday, and it also drew a demo rating of 7.2.  Even though they were better than any other non-sports show on TV they were down 18% and 26% from the opener from last season.

Idol better get itself in gear because ‘The Voice’ is premiering soon and it is sure to give Idol some competition. On last night’s episode we met ‘Tent Girl’ a contestant Amy Brumfield who shocked us all by revealing that her and her boyfriend were living in the woods, in a tent.  Amy, 24, blew the judges away with not only her living conditions, but also her voice. She sang Alicia Keys ‘Superwoman’, and got her gold ticket to Los Angeles.  As Celeb Dirty Laundry reported this morning it has been discovered she has a long criminal record.  Should Idol fans judge her for her past problems?  Sound out in the comments below.

Standout performances from last night were 15 year-old Shannon MacGrane from Tampa, Florida who sang Somethings Got A Hold of Me by Etta James she was fantastic.  My other favorite was Philip Philips a 20-year old from Georgia who first sang Superstition and then Michael Jackson’s Thriller.  As Jennifer Lopez told him he is special, he is certainly someone to watch.

42 singers got the gold ticket to Hollywood. tonight the judges head to Pittsburgh!

Stay tuned we will be covering the show with all the up-to-the-minute details tonight at 8PM EST, so don’t forget to stop by  and refresh often to get the newest updates.

RECAP: Tonight the judges are in Pittsburgh “The City Of Champions”, for the first time in eleven years, Heejun Han has trouble containing his excitement to audition, he is from Korea but no lives in New York. He loves singing soul and R&B, he chooses to sing How Can I Live Without You by Michael Bolton.  Tyler loved it, he thought he sang great. Both Lopez and Jackson were impressed as well. Heejun told Jackson that he looks better in person than on tv. Heejun gets three votes, he’s going to Hollywood.

Reed Grimm singing the theme song to Family Matters, he’s been singing since the age of two. Tyler called him crazy and a genious. Jackson loved the passion and Lopez called him a great performer, he’s going to Hollywood.

Aaronn Marcellus next and he’s getting his golden ticket, along with Chase Likens and a lot of other hopefuls.

Creighton Fraker from New York, he wrote his own song on the bus on the way from New York to Pittsburgh. Tyler liked it, he called it beautiful, the other two judges seem to be somewhat on the fence. Tyler asks him to sing another song and picks a real bluesy one that knocks off all their socks. Jackson says he has a weird kind of wacky voice, it’s a ticket to Hollywood.

Eben Franckewitz “People say I look like Justin Bieber” he said. He has a pretty voice, confidence and warmth, more so than Jacee from last year.

Travis Orlando, a high school dropout who was already at an audition a year ago. He sings Stevie Wonder’s Isn’t She Lovely. He’s good but not star quality, he’s given a shot at Hollywood though it’s unlikely he’ll make it to the top 42.

Erika Van Pelt, a Rhode Island mobile DJ and wedding singer sings a Carole King song Will You Love Me Tomorrow, she get’s a golden ticket.

Shane Bruce, a coal miner from West Virginia singing In the Still of the Night in the actual coal mine. Jennifer wasn’t impressed with his song choice.

Hallie Day used to be in a girl group in New York and hit rock bottom with a suicide attempt. She is sings I Will Survive by Gloria Gaynor, which gets her a golden ticket as well.

What did you think of tonight’s episode? Was it all that? Do you think any of them will make it through to the top 42?