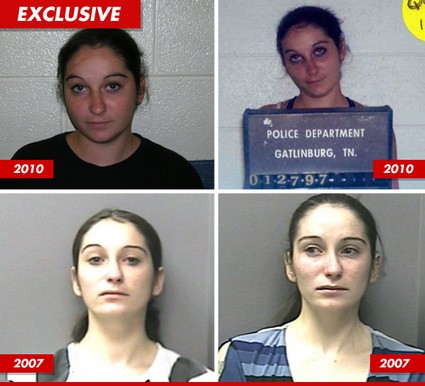 After last night’s American Idol’s premiere, contestant Amy Brumfield shocked us all by revealing that her and her boyfriend were living in the woods, in a tent. And trust me, this tent was not the type of tent that I camp with.  If you missed the show you can read our official recap here!

Amy, 24, blew the judges away with not only her living conditions, but also her voice. She sang Alicia Keys ‘Superwoman’, and got her gold ticket to Los Angeles.

It has now been revealed by TMZ that Amy has a long, long criminal record, revealing the serious struggles she’s had with alcohol. So far to date, she has been arrested 6 times in the past 7 years. One of these times was on August 22, 2010 after publicly urinating on herself in the lobby of a Baskin Robbins. Shortly before that, police officers arrested her for being intoxicated in front of a Tennessee restaurant. Tack on some underage drinking arrests, and an arrest for staying at a property after her lease had ended – well, there you have it.

I’m definitely now not as overly surprised about the whole tent-living situation. Should Idol fans judge her for her past problems? Doesn’t everyone deserve a second (or eight) chance? I think so, as long as you want it bad enough and make the necessary changes to clean up your act. Thankfully, Amy seems motivated and ready to embark on a new life. Time will tell how far she goes and what she does with her golden ticket!