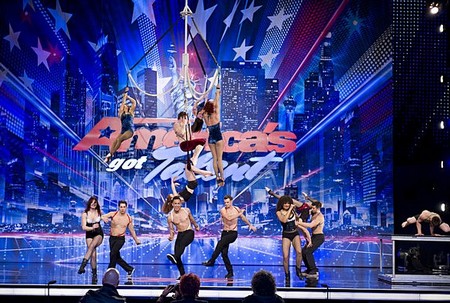 Tonight on NBC is an all new episode of America’s Got Talent. On tonight’s America’s Got Talent the boot camp begins in Las Vegas with Howard Stern, Howie Mandel, Sharon Osbourne and Nick Cannon  and their search for the million-dollar act and deciding who would will make it to the top 48; which is now just one step away.  If you missed last week’s episode, we have a full and detailed recap for you HERE.

Talent worth mentioning from last week: A dance crew called 787 from Puerto Rico. Sharon loved it. Howie said he loved the outfits, the dancing and the attitude. Howard thought it was one of the best dance acts they’ve seen on that stage. 787 made it to Vegas.

The last audition was Mary Joyner and she sang. Howie fell in love with her.  Howard got goose bumps. Sharon said that her singing moved everyone in the audience. Mary also went on to Vegas.

There will be three nights of Vegas performances for the first time in the show’s history with the Top 48 determined after the Vegas audition shows. The live show begins from New York on Monday, July 2nd at 9 PM with an amazing two-hour episode and the one hour results show will air the following night.

Tonight’s episode looks like it is going to be exciting and you won’t want to miss it, so be sure to tune in for our live coverage of  NBC’s America’s Got Talent at 9 PM EST!  While you wait for our recap hit the comments and let us know what you thing of season 7 of AGT so far!

RECAP: It’s Vegas baby! Everyone is excited and making new friends, but they are also there to compete to be in the top 48 and get in the live show.

Charly C, Ivy Rose and Bandz Brothers didn’t make it through, it’s the end of the road for them.

The judges have given away three spots, one was an animal act. Next is the danger category; All Wheel Sports is performing for the judges. Christin Sandu gives another go at balancing. Ben Blaque is doing his cross bow act again, he unbelievably doesn’t kill anyone.

Female singers are next; Mary Joyner gets another chance to convince the judges, but her voice is cracking and she knows she blew it. Roxy Doll, Brianna Price and Cecillia Detwiller all get another go at it but they bomb. Lune has her make it or break it performance and her nerves get the best of her on stage. The judges call Luna back out and tell her to her face that she came out with a defeated look on her face, they are sending her home.

Nikki Jensen is next, she gave up a career in journalism to be on the show and she does good.

Funk Beyond Control performs, so does All That! and Loyalty Dance Team messes up.  787 Crew is next, they bring a whole bag of tricks but one guy falls, Howard still loved them.

Novelty acts are next; first we get to see Horse get hit in the nuts again and again but Howard likes him better when he is in his underwear. All Beef Patty gives us another singing performance. Joe Castillo gives us another amazing design, Todd Oliver Irving and his dog give another try at comedy, Light Wire Theater gives us some dinosaurs and flowers in the dark, Aurora Light Painters also give us a light show and  it was above and beyond what anybody thought they would do.

In the classical singer category Simply Sergio takes another try at his opera singing and forgets the words. Luiz Meneghin is next to show off his opera talents, he does an ok job and doesn’t forget the lyrics. Andrew De Leon is the last opera singer, he also bombs.

That’s it for tonight, we will find out next time whether any of the opera singers make it through.